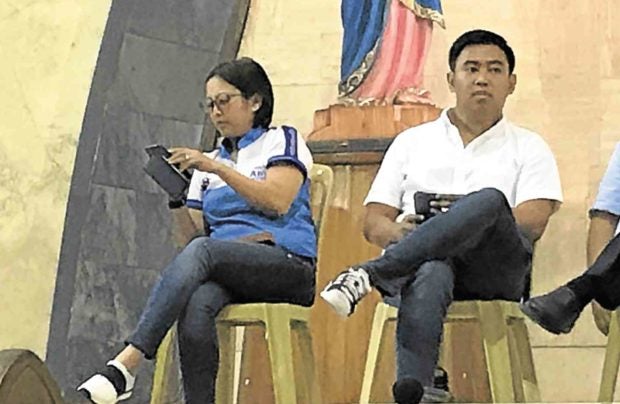 MENDING FENCES Is a reconciliation in the offing for the Binay family whose members were divided when Abby and brother Junjun decided to both run for Makati mayor? —DEXTER CABALZA

MANILA, Philippines — Makati Mayor-elect Abby Binay appealed for unity as she celebrated her reelection during a victory party held simultaneously with the city’s 349th founding anniversary on Saturday.

As she took her oath before Supreme Court Associate Justice Diosdado Peralta, she was joined by her husband, reelected Rep. Luis Campos of the city’s second district, their daughter Martina and her father, former Vice President Jejomar Binay.

“Hopefully starting today, June 1, we can start healing, we can start rebuilding because what we need is a united Makatizen,” Abby told the crowd on Makati Avenue.

Saturday’s gathering was the first time she addressed her constituents since she defeated her younger brother, Junjun Binay, on May 13, for the city’s mayoral seat.

It was not known, however, if her appeal was also directed at family members who had publicly supported Junjun’s mayoral bid: her mother Elenita and sisters Senator Nancy and Anne. Abby, on the other hand, got the backing of their father.

Junjun, who has yet to issue a public statement since his loss, will leave for the United States from June 3 to 27 after the Sandiganbayan approved his request.

He is being tried on graft charges in connection with the construction of the P2.28-billion Makati City Hall parking building.