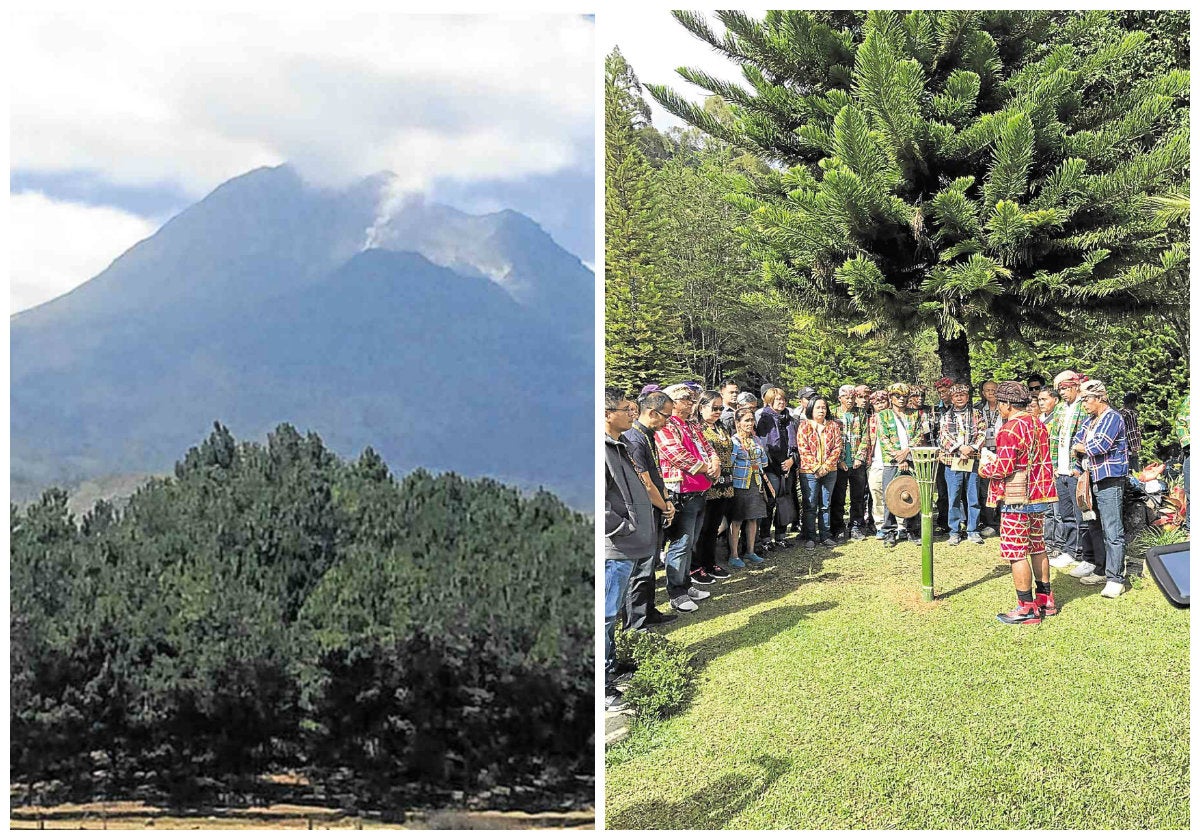 PRAYERS FOR PROTECTION Tribal leaders of the Manobo-Apao Descendants of Ancestral Domain of Mt. Apo (right) perform a “samaya” to implore their ancestors to bless the site of the two geothermal power plants at the foot of the country’s tallest peak in Kidapawan City. Mt. Apo, as seen from Digos City in Davao province (left), is home to many of the region’s indigenous peoples. —PHOTOS BY ORLANDO B. DINOY

KIDAPAWAN CITY, Cotabato, Philippines — With tribe leaders imploring their ancestors to bless the project site for the next quarter century, the Manobo people at the foot of Mt. Apo have allowed a power company to continue operating two geothermal plants in their ancestral domain.

In exchange for royalty from the company’s operation, the Manobo tribe granted Energy Development Corp. (EDC) free rein to tap geothermal energy in the area for the next 25 years, or until 2044.

The right to operate at the foot of the country’s tallest mountain was sealed in a memorandum of agreement signed on Saturday between EDC officials and leaders of the Manobo-Apao Descendants of Ancestral Domain of Mt. Apo (Madadma) at Sitio Sayaban, Barangay Ilomavis, in this city.

In a region where several indigenous peoples abhor the entry of investors for fear that their operations would cause the degradation of their ancestral lands, the EDC-Madadma agreement is a whiff of fresh air.

The royalty—equivalent to 1 centavo per kilowatt-hour of geothermal power generated each year by EDC—will be used to uplift the living conditions of the Manobo community.

Tribe leaders said the deal on royalty was unprecedented and would give the Manobo a steady source of income to help provide livelihood to the indigenous peoples in the area.

Nancy Ebona, external media operations officer of EDC, said the company signed the agreement with the tribe after the National Commission on Indigenous Peoples (NCIP) granted free, prior and informed consent to EDC.

The NCIP consent allows EDC to operate in an ancestral domain area.

Datu Umpan, tribal chieftain from Barangay Balabag, said the agreement would now directly benefit the Manobo community, unlike in the previous 25 years when the geothermal power plants were operated by a consortium.

Before the two parties signed the deal, the Manobo held a “samaya” (a tribe ritual) to ask their ancestors to bless the site.

The two geothermal power plants actually started operation on March 4, 1997, and June 17, 1999, and were owned by M1GP, a partnership between Oxbow Power Corp. and Japanese energy company Marubeni Corp.

M1GP and M2GP provided nearly 11 percent of the  entire electricity supply in Mindanao, mainly in the Soccsksargen and Davao regions.

The geothermal service contract for Mindanao was previously awarded by the Department of Energy to the then government-owned Philippine National Oil Company-Energy Development Corp. in 1992. It was renewed for another 25 years in 2017.

Ebona said the contract that EDC entered with the energy department was different from the agreement it signed on Saturday with Madadma.

EDC, which was privatized in 2006, is the country’s leading producer of geothermal energy, accounting for 62 percent, or 1,199 MW, of the total installed capacity of 1,980 MW.