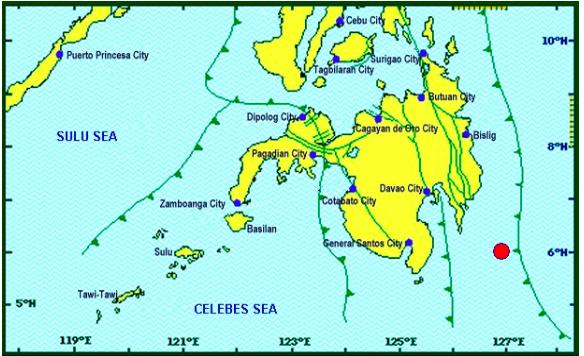 An earthquake of magnitude 5.4 (earlier estimated as magnitude 6.1) struck the waters off Governor Generoso, Davao Oriental on Saturday afternoon, the Philippine Institute of Volcanology and Seismology (Phivolcs) said.

This quake — which struck barely 24 hours since the same town was hit by a magnitude 6.2 tremblor — had its epicenter at 119 kilometers southeast of Governor Generoso.

Phivolcs said that the quake, which occurred at 5:45 p.m., was of tectonic origin with a depth of focus of 80 kilometers.

The quake was felt at the following intensities in various areas:

Residents are advised to expect for aftershocks.

However, no damage was expected, Phivolcs added.