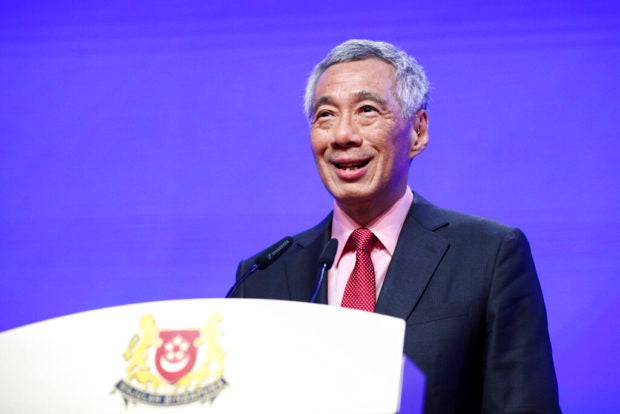 Singaporean Prime Minister Lee Hsien Loong delivers a keynote address during the opening dinner of the 18th International Institute for Strategic Studies (IISS) Shangri-la Dialogue, an annual defense and security forum in Asia, in Singapore on May 31, 2019. AP

SINGAPORE — Singapore Prime Minister Lee Hsien Loong said Friday that countries including the United States need to be willing to change international rules in response to a stronger China.

Speaking at an annual security conference in Singapore, Lee said China must in turn play a greater role in supporting trade frameworks and upholding peace and stability in the region and beyond.

“Countries have to accept that China will continue to grow and strengthen, and that it is neither possible nor wise for them to prevent this from happening,” he said.

“China will have its own legitimate interests and ambitions, including to develop indigenously advanced technologies like infocomms and artificial intelligence. New international rules need to be made in many areas, including trade and intellectual property, cybersecurity and social media.”

Lee was the keynote speaker at the Shangri-La Dialogue, attended by U.S. Acting Secretary of Defense Patrick Shanahan, Chinese Defense Minister Wei Fenghe and other defense officials and academics.

He noted that the U.S. “has the most difficult adjustment to make” as the “pre-eminent power.”

Earlier this month, the U.S. and China countries concluded their 11th round of trade talks with no agreement and raised import taxes on each other’s goods.

Lee expects China to want a say in any new rules, because it did not participate in the creation of current ones. “And this is an entirely reasonable expectation,” he said.

In return, China should take on more responsibilities and not expect to be treated in the same way as it was in the past, he said. This extends to trade arrangements and concessions that the country negotiated when it joined the World Trade Organization in 2001.

At that time, China’s merchandise trade accounted for 4% of the world’s total.

Lee said its share has since almost tripled to 11.8%, making the terms “no longer politically wearable for other countries.”

“It is in China’s own interest to prevent the international framework of trade from breaking down, and to implement timely changes that bring about greater reciprocity and parity with its trading partners,” he added.

He also urged China to use its strength “with restraint and legitimacy” and settle disputes peacefully in areas like the South China Sea.

“It should do so through diplomacy and compromise rather than force or the threat of force, while giving weight to the core interests and rights of other countries,” Lee said.

“Then over time it will build its reputation as a responsible and benevolent power that need not be feared.”
China is pitted against smaller neighbors in multiple disputes over islands, coral reefs and lagoons in the crucial waters.

On Thursday, its defense ministry dismissed a report that Australian navy pilots were hit by lasers earlier in May while exercising in South China Sea waters claimed by China.

Lee said the hardening of attitudes in both the US and China was worrying.

“The fundamental problem between the US and China is a mutual lack of strategic trust. This bodes ill for any compromise or peaceful accommodation. But to go down the present path would be a serious mistake on both sides. There is no strategic inevitability about a US-China faceoff,” he added.

Shanahan and Wei met on the sidelines of the conference Friday and agreed to improve communication and deepen exchanges and cooperation between their militaries. /ee

Read Next
Ex-CHR chair: Set up trust fund for proceeds of Marcos jewelry auction
EDITORS' PICK
51% of Filipinos think it’s dangerous to publish anything critical about Duterte admin — SWS
PhilHealth mess: Whose heads will roll? Roque says he can’t wait to name names
COVID-19 cases in PH overshoot 122,000 mark
Water remains our saving grace right now
Smart 5G goes live
The biggest lottery jackpot in the world is $158 million, and even someone from the Philippines could win it
MOST READ
Captain astonished that his ship delivered Beirut explosive
‘Vexed’: Guanzon raps Topacio over Alzheimer’s remark
Locsin to China: Don’t overinterpret
COVID-19 cases in PH overshoot 122,000 mark
Don't miss out on the latest news and information.