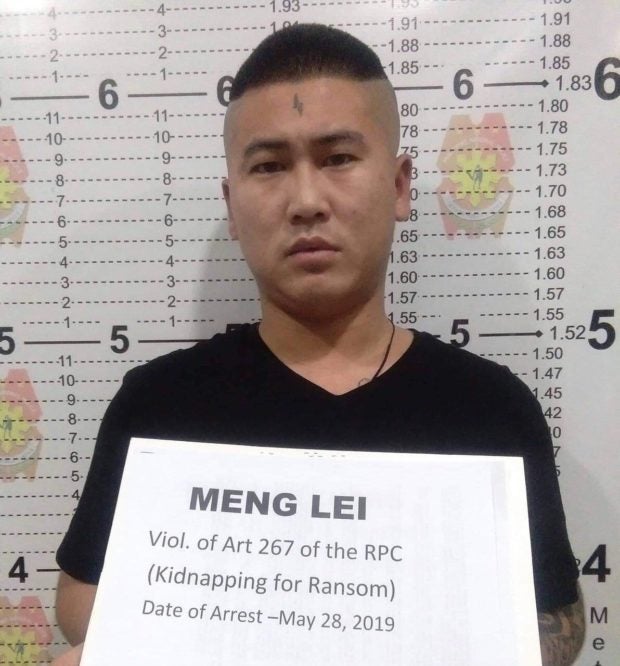 Chinese national Meng Lei, one of the alleged abductors of Jianting Chen, an Australian-Chinese, poses for a mug shot after he was arrested by officers of the Philippine National Police-Anti-Kidnapping Group on May 28, 2019. PHOTO from PNP-AKG

Police identified on Thursday the victim as Jianting Chen, 29, who was rescued on Monday at the Ninoy Aquino International Airport Terminal 1.

According to police, the victim borrowed cash worth P500,000 from five Chinese nationals — four males and a female. Police said Chen lost in a gambling den and could not pay his debt.

Col. Julius Lagiwid, officer-in-charge of the PNP-AKG, told INQUIRER.net that the victim was abducted from a high-end casino in Manila around 3:30 p.m. on May 24.

A report from the PNP-AKG said Chen’s abductors demanded RMB 90,000 (approximately P680,000) from the victim’s wife through bank transfer for his release.

Police said they learned the abduction from an officer of the Australian Federal Police. Operatives of the PNP-AKG were then deployed to trace the victim, which later led to his rescue.

At around 7:30 p.m. on Tuesday, while police were conducting surveillance operation near the entrance of the casino, the victim spotted one of the suspects identified as Meng Lei, 21.

Police then arrested the suspect and is now under the custody of the PNP-AKG.

Initial investigation showed that Chen was also kidnapped in Pasay City in February this year by four Chinese nationals who were alleged members of a loan shark syndicate. His abductors at the time were arrested.

Lagiwid said he does not see a direct link between the suspects in the kidnapping of Chen in February to his abductors now.

Meng Lei is facing cases of kidnapping for ransom and serious illegal detention, according to police.