Lacson hits BI: Chinese in P1.8-B ‘shabu’ shipment got in and out of PH | Inquirer News
Close
menu
search

newsinfo / Headlines
Headlines
DESPITE BEING ON INTERPOL WATCH LIST

Lacson hits BI: Chinese in P1.8-B ‘shabu’ shipment got in and out of PH 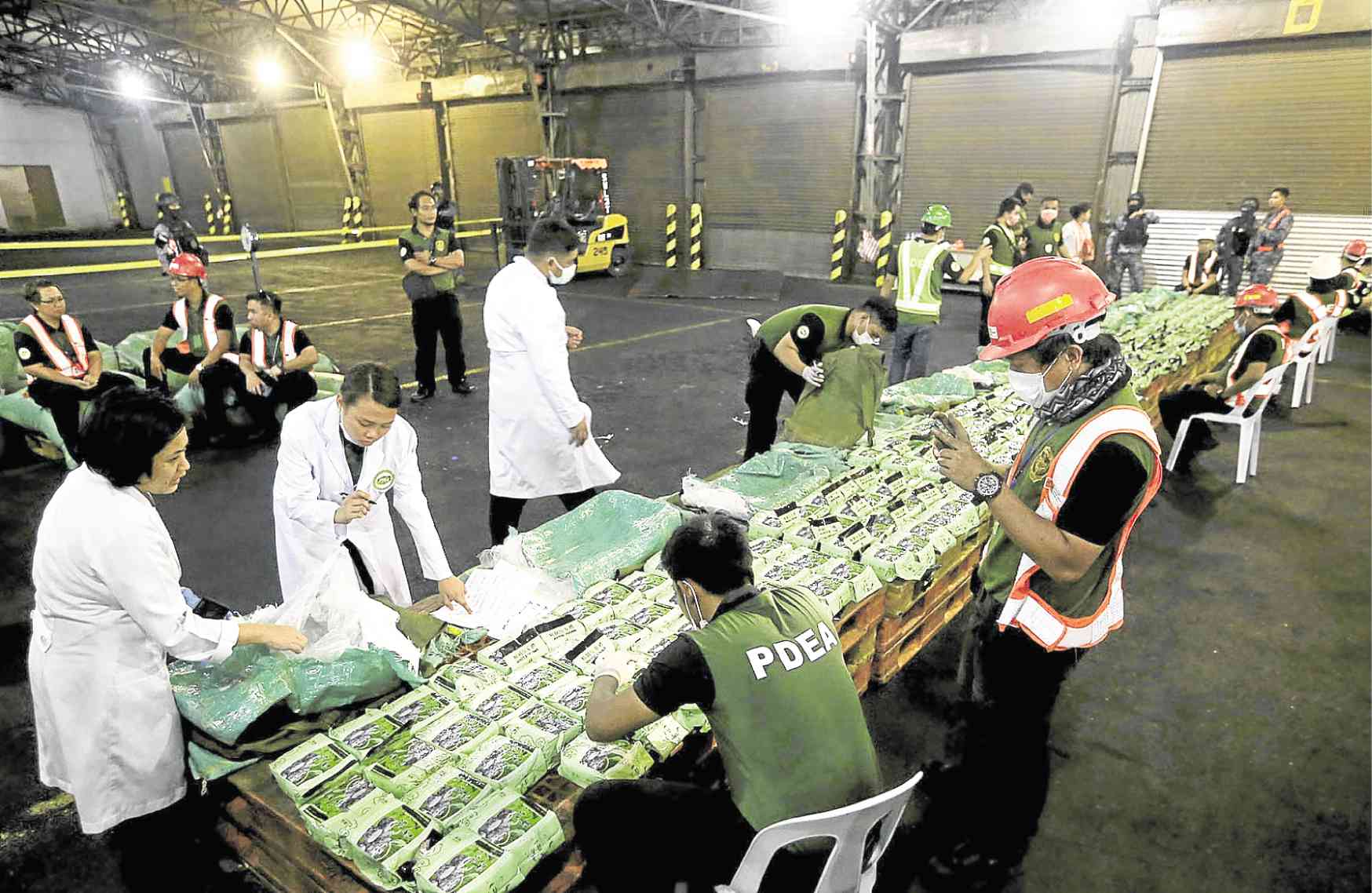 SMUGGLING FOILED The P1.8-billion shipment of “shabu” (crystal meth) was discovered on March 22 in a container declared to be holding plastic resin at the Manila International Container Port. —RICHARD A. REYES

MANILA, Philippines — A Chinese national, who allegedly facilitated the smuggling of P1.8 billion worth of “shabu” (crystal meth), which authorities seized at the port of Manila two months ago, was able to fly in and out of the country despite being on the Interpol watch list, Sen. Panfilo Lacson said on Wednesday.

In a privilege speech, a visibly incensed Lacson said Zhijian Xu, who also used the name Jacky Co, was in the country to personally monitor the shipment of 276 kilos of shabu, which were recovered by agents of the Philippine Drug Enforcement Agency (PDEA) at the Manila International Container Terminal on March 22.

He said Co, regarded as “among the wanted personalities in China” and a subject of the Interpol’s list of suspected criminals, flew to Vietnam via Singapore on April 3, or two weeks after the contraband was seized.

“Even revolting is, in spite of his alleged involvement in criminal activities here and in China, he had left Manila via Philippine Airlines flight bound for Vietnam,” Lacson said.

Flying in and out

“One may wonder: How can a person of such character slip [through] the stringent scrutiny of the Bureau of Immigration (BI) personnel manning our airports considering that the BI now uses ‘state-of-the-art, biometrics-based system for its computers in all international airports nationwide?’” the former Philippine National Police chief said.

Co, he added, was obviously not in a rush to flee the country and was “confident” enough to fly out through Ninoy Aquino International Airport, the country’s primary gateway.

“While we surely celebrate high-impact operations, shenanigans embedded in the rotten system tend to overshadow our progress,” Lacson said.

He claimed Co was not only involved in the illegal drug operations, but also in kidnappings.

According to Lacson, the Chinese national was involved in a recent kidnapping for a ransom of P250 million. He said Co, who supposedly owned the Bulacan-based Feidatong International Logistics Co., collected his share of the ransom through “wire transfer and offshore banking.”

He also lambasted the Bureau of Customs (BOC) and the PDEA for auctioning off three shipping containers filled with 146 kilos of shabu worth P1 billion supposedly to lure the individuals behind the drug shipment.

The PDEA said the contraband was found stuffed in the shipment of aluminum pallets and tapioca starch that were shipped from Cambodia in March.

Lacson said the information provided to the public by the PDEA and the BOC on the recovery of the shabu shipment was questionable.

“The [BOC] averred that it deliberately placed the shipment containing illegal drugs for auction, which was later bidded out and won by Goldwin Commercial,” he said.

“Let’s assume for a while that we are buying their story, is the BOC legally allowed to subject prohibited goods to public sale or auction?” he asked

The senator pointed out that Section 1139 of Republic Act No. 10863, or the Customs Modernization and Tariff Act, explicitly stated that “public auction is not one of the prescribed means of disposing prohibited goods.”

“In this case, prohibited goods, including the shabu … should be destroyed and therefore, should not have been offered for sale in a public auction,” he said.

Lacson said he did not believe the claim of the PDEA and BOC officials that they sent out the shipment using the “controlled delivery” tactic.