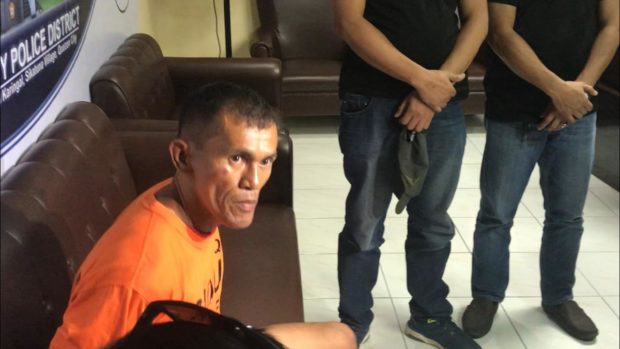 Carl Joseph Alarin Bañanola, the suspect in the killing of octogenarian couple in Quezon City, was arrested on Tuesday, May 28, 2019. (Photo by CONSUELO MARQUEZ / INQUIRER.net)

MANILA, Philippines — The suspect in the killing of an octogenarian couple was shot dead as he allegedly fought back against police officers in a patrol car in Quezon City on Wednesday night.

In an initial report, Carl Joseph Alarin Bañanola, 37, had just finished undergoing his inquest and boarded the police car at around 6:40 p.m. on Kalayaan Avenue beside the Quezon City Hall.

He was being escorted by officers from the Novaliches Police Station. They were on their way to the Criminal Investigation and Detection Unit (CIDU) in Camp Karingal, headquarters of the Quezon City Police District.

Minutes later, he requested that his handcuffs be loosened. Staff Sgt. Alex Icban did so. But then the suspect grabbed his gun and tried to fire at the officers.

Lt. Col. Rossel Cejas, chief of the Novaliches Police Station, pulled out his own gun and shot Banañola.

The suspect was taken to the East Avenue Medical Center, where he was declared dead on arrival.

Bañanola was arrested on 4th Avenue in Caloocan City on Tuesday.

He was tagged in the killing of Nicolas Austria and his wife Leonora Austria, who were stabbed to death in their house in TS Cruz Subdivision, Barangay San Agustin, Novaliches on Sunday afternoon.

ADVERTISEMENT
Read Next
Why a deadly shadow hangs over Everest summit
EDITORS' PICK
DOH to present new method of reporting COVID-19 cases next week
Philippines logs 1,494 new COVID-19 patients; tally now at 41,830
Smart releases Hyun Bin’s second TVC
Water remains our saving grace right now
EuroMillions Superdraw: A lottery draw unlike any other is coming to the Philippines
Almost 4,000 former communist rebels get financial aid from gov’t–DILG
MOST READ
NAIA Terminal 3 to open for international flights starting July 8
Lacson calls report ‘malicious,’ but journalist says she tried to contact him
As Ringo Starr turns 80, he talks about his life, Beatles journey, including that unfortunate Manila experience
‘Keep our silence:’ Duterte tells troops not to avenge slain agents
Don't miss out on the latest news and information.