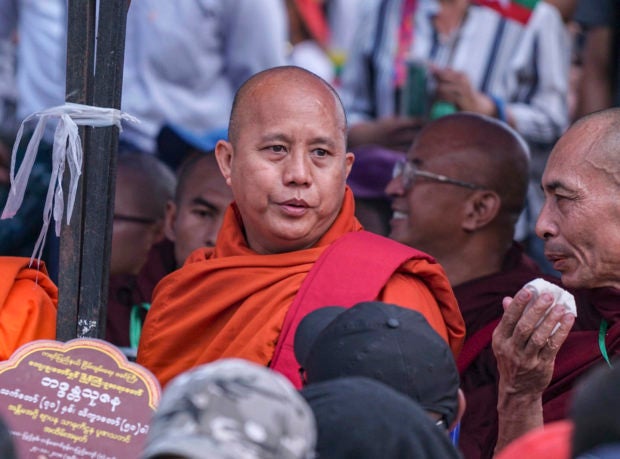 In this May 5, 2019, photo, Buddhist monk and anti-Muslim community leader Wirathu is seen during a nationalist rally in Yangon, Myanmar. A court issued Wednesday, May 29, 2019, an arrest warrant for the Buddhist monk famous for his incendiary comments about the country’s Muslim minority and criticisms of the government. The warrant issued in Yangon charges Wirathu with sedition for remarks he made on May 5 about the government of Myanmar’s leader, Aung San Suu Kyi. (AP Photo/Aung Naing Soe)

YANGON, Myanmar — A court in Myanmar has issued an arrest warrant for a Buddhist monk known for incendiary comments about the country’s Muslim minority and for criticism of the government.

The warrant issued in Yangon charges Wirathu with sedition for remarks he made on May 5 about the government of leader Aung San Suu Kyi. Police said Wednesday the warrant has been forwarded to Mandalay, where Wirathu’s monastery is.

Wirathu came to prominence in 2012 after deadly riots broke out between Buddhists and Muslims in the western state of Rakhine. He founded a nationalist organization, since disbanded, that was blamed for inciting violence against Muslims.

Under Myanmar law, Wirathu would have to be defrocked by Buddhist authorities before he could be arrested. /kga