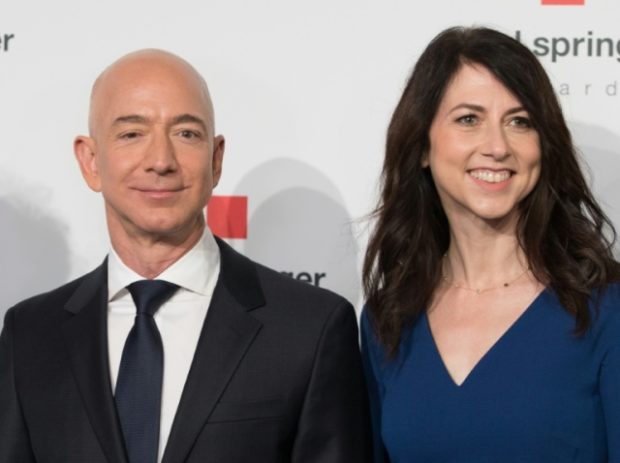 MacKenzie Bezos became one of the wealthiest people in the world but will donate much of her fortune. Image: JORG CARSTENSEN – dpa/AFP/File

MacKenzie Bezos, soon-to-be ex-wife of Amazon founder Jeff Bezos, has promised to donate half her fortune to charity, joining the ranks of the world’s ultra-wealthy philanthropists, the Giving Pledge announced Tuesday.

The charitable organization, founded in 2010 by Warren Buffett and Bill Gates, listed MacKenzie Bezos, an American, among 19 new signatories of the pledge from China, Switzerland, the United Arab Emirates and Britain.

She instantly became one of the world’s wealthiest individuals in April, gaining a net worth estimated at $36 billion (P1.8 trillion) after finalizing the terms of her divorce with Jeff Bezos, the world’s richest man.

“In addition to whatever assets life has nurtured in me, I have a disproportionate amount of money to share,” MacKenzie Bezos said in a letter announcing that she was joining the pledge.

“My approach to philanthropy will continue to be thoughtful. It will take time and effort and care. But I won’t wait. And I will keep at it until the safe is empty.”

As part of the couple’s pending divorce, MacKenzie Bezos is to retain 25% of the Amazon shares the pair had held jointly, equal to about four percent of the company, but will surrender all her voting rights.

More than 200 people have taken the Giving Pledge, including Facebook founder Mark Zuckerberg, investor Bill Ackman, Microsoft co-founder Paul Allen, and investor Robert F. Smith, who made waves earlier this month by announcing he would pay off the student loans of an entire graduating class at the historically black Morehouse College in Atlanta, Georgia.

Jeff Bezos, whose fortune is currently estimated at well over $100 billion, has not taken the pledge but in September announced a $2 billion investment fund intended to support homeless families and education in poor communities.

MacKenzie Bezos, born MacKenzie Tuttle, met Jeff Bezos in 1992, before he founded what would become the global online retail, tech and government contracting behemoth Amazon. The company is worth nearly $900 billion.

The announcement of their divorce in January was followed several weeks later by the publication of personal text messages between Jeff Bezos and Lauren Sanchez, a television personality with whom he had an extramarital affair.

Forbes has yet to list MacKenzie Bezos on its list of billionaires, pending the finalization of the divorce, which should make her the world’s third-richest woman, behind France’s Francoise Bettencourt-Meyers, the L’Oreal heiress ($49.3 billion), and the American Alice Walton, daughter of Walmart founder Sam Walton ($44.4 billion). NVG