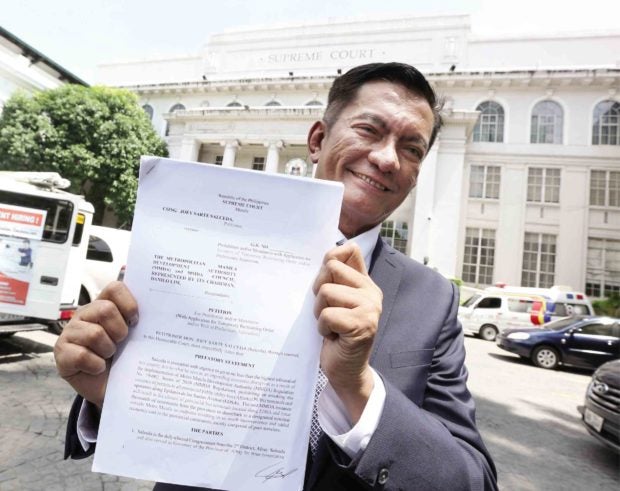 MANILA, Philippines — Another petition seeking to stop the implementation of a ban on provincial buses plying Edsa was filed in the Supreme Court on Monday.

“The move of [the Metropolitan] Manila Development Authority (MMDA) is antimajoritarian, antiproletarian, anticommuter,” Albay Rep. Joey Salceda said in a statement as he asked the high tribunal to issue a temporary restraining order (TRO).

He pointed out that there were 2.8 million cars in the National Capital Region plying Edsa compared to only 6,000 provincial buses. “[What] do you think is actually causing traffic?” Salceda asked.

“Why pick on our poor ‘probinsyanos’ to solve Metro Manila traffic? While each bus can carry 50 [people], each car carries only five,” Salceda said.

He noted that the transfer of bus stations outside Edsa would only cause “great economic disruption, inconvenience, expenses and damages to multitudes of commuters to and from as far as the Visayas and the Bicol region.”

Salceda said the “idiocy of the Edsa provincial bus ban [emanated] from the acknowledgement of MMDA Traffic Manager Bong Nebrija that the MMDA, through the Metro Manila Council (MMC), formulated the [policy] without any public consultation…”

Under the ban set to take effect next month, provincial buses from the south would drop off their passengers at terminal hubs in Santa Rosa, Laguna, and Parañaque City. Those from the north would make the Valenzuela City terminal hub their last stop.

But Salceda called the move unjust as it would inconvenience provincial commuters who would have to find another way to get to Metro Manila.

“The MMDA will ban 6,000 northbound and southbound provincial buses from plying Edsa but will, in turn, allow the entry of close to 20,000 assorted vehicles along the same route, among them some 14,000 new, black painted taxis, to service these provincial commuters. How then can it be called a solution to the traffic problem?” he said.

According to Salceda, the “MMC was never advised that 72 percent or 235,000 cars of the 330,000 vehicles that use Edsa daily were cars that had only the driver as the lone rider, yet the MMC/MMDA chose to penalize the riding public using public transport from the provinces [although] buses comprise only two percent of the total vehicles plying Edsa.”

The AKO Bicol partylist group also filed a petition for a TRO in the high court in April, saying the MMDA’s move to revoke the business permits of bus terminals on Edsa was unconstitutional.