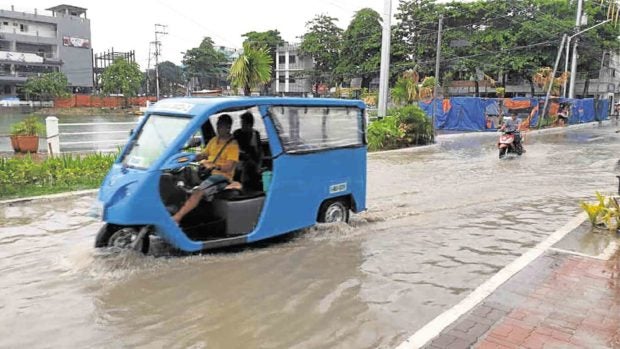 ISLAND FLOODING The main road in the Lake Town area in front of D’Mall complex on Boracay Island is flooded after a downpour on Sunday. —PHOTO FROM FACEBOOK PAGE OF BORACAY REHABILITATION CONTINUES

ILOILO CITY, Philippines — Residents of Boracay raised an outcry after several sections of the resort island in Malay town, Aklan province, were hit by floods following a four-hour downpour during the weekend.

The flooding, which hit D’Mall commercial center, Cagban port and alleys and side roads, raised questions on the state of rehabilitation on the island.

“What the heck! They closed the island for six months for rehabilitation and we still get this? In some areas, it’s even worse. Is this the ‘new’ Boracay?” an expatriate, who waded through floodwaters on Sunday morning, told the Inquirer.

The resident, who asked not to be identified to avoid antagonizing local officials, said flooding affected even long stretches of the newly upgraded main road from D’Mall to Station 3 at the southern section of the island.

“Water that overflowed from the road reached adjacent areas,” the source said.

Many residents also aired their displeasure through social media posts.

Many lamented that thousands of workers, employees and business owners suffered for six months due to the closure of the island from April 26 to Oct. 25 last year because of the rehabilitation efforts.

President Rodrigo Duterte ordered the closure of the island to tourists due to the island’s environmental problems.

Around 30,000 workers and residents dependent on tourism for their livelihood were severely affected. Small businesses were also forced to shut down.

Natividad Bernardino, general manager of the Boracay Interagency Rehabilitation Management Group, said the flooding near D’Mall area was caused by inlets that were clogged by materials from an ongoing construction of speed tables (flat-topped speed humps).

She said a flooded area near Ambassador Hotel in Station 1 was a perennial problem, noting that an outfall leading to a wetland there would still be built. As a temporary measure, water in that area would be drained, she said.

Al Fruto, assistant director of the Department of Public Works and Highways (DPWH) in Western Visayas, said the upgrading of the drainage system had yet to be completed by the DPWH and the Tourism Infrastructure and Enterprise Zone Authority.

“There will be areas that will … be inundated because we have not fully connected the drainage pipes, inlets and outfalls,” he told the Inquirer.

He said they were rushing the projects by sending more personnel to the island.

Flooding has become a problem in Boracay during heavy rains and when typhoons hit due to clogged drainage pipes and canals.

The widening of the 20-kilometer road network on the island and the upgrading of the sewerage system are main components of Boracay’s rehabilitation.

This covers the 1.9-km road from the Elizalde property to CityMall in Barangay Yapak at the northern end of the island where most of the high-end resorts operate. It also includes a span of 1.4 km from Crossing Rotunda to Tambisaan port in Manoc-Manoc.