TOKYO – President Donald Trump said Monday that he is not “personally bothered” by recent short-range missile tests that North Korea conducted this month, breaking with Japanese Prime Minister Shinzo Abe, who is hosting the president on four-day state visit full of pageantry.

Abe, who stood beside Trump at a news conference after hours of talks, disagreed with the U.S. president, saying the missile tests violated U.S. Security Council resolutions and were “of great regret.”

Abe, who has been cozying up to Trump on a number of issues, is concerned because the missiles pose a threat to security in Japan. 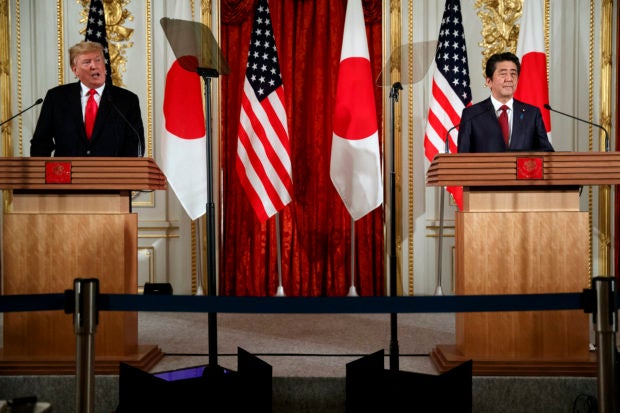 Trump was far from Washington, but he didn’t miss the chance to lob another broadside insult against former Vice President Joe Biden, one of the Democrats seeking to challenge Trump in next year’s presidential election.

North Korea’s Kim Jong Un recently criticized Biden as having a low I.Q. and Trump told the world he agreed with the authoritarian leader’s assessment.

Abe is hosting Trump on a state visit designed to highlight the U.S.-Japan alliance and showcase the friendship and warm relations between the leaders. During hours of talks, Trump and Abe deliberated over economic issues, including trade and Iran. /gg