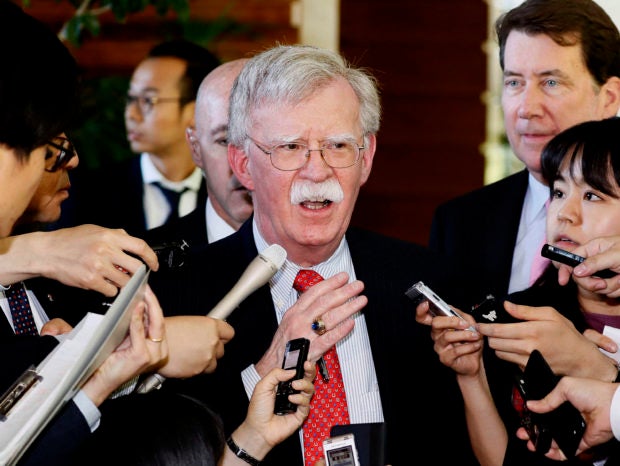 The statement by an unnamed North Korean foreign ministry spokesman came as President Donald Trump continued his visit to Japan for meetings with Japanese Prime Minister Shinzo Abe in which the nuclear standoff with North Korea was expected to be high on the agenda.

Bolton told reporters in Tokyo on Saturday that there was “no doubt” that North Korea’s recent launches violated U.N. resolutions, and that sanctions against the North must be kept in place. Trump later downplayed the missile tests, tweeting, “North Korea fired off some small weapons, which disturbed some of my people, and others, but not me.”

North Korea tested short-range ballistic missiles on May 4 and 9, ending a pause in launches that began in late 2017. The tests have been seen as a way for North Korea to pressure Washington to soften its stance on easing sanctions against it without actually causing negotiations to collapse.

In the statement carried by Pyongyang’s official Korean Central News Agency, the North Korean spokesman said the North was rightfully exercising its rights of self-defense with the launches.

“Demanding us to ban all launches using ballistic technology regardless of range is same with asking us to relinquish our rights for self-defense,” the spokesman said.

The spokesman said Bolton was an “ignorant” hard-liner who throughout different U.S. administrations constantly pushed provocative policies against North Korea, which the spokesman said included endorsements of pre-emptive strikes and regime change.

The spokesman also said that Bolton’s “hammer act” was responsible for the collapse of a major nuclear deal between the countries reached in 1994, when the North agreed to halt its nuclear program in exchange for U.S. fuel aid. The deal broke down in 2002 after U.S. intelligence agencies said North Korea was continuing its pursuit of bombs with a secret uranium enrichment program.

“Bolton should not be called a security adviser who works to secure security, but an adviser for security destruction who destroys peace and security,” the spokesman said. “It’s not that strange that crooked sound will always come out the mouth of a man who is structurally flawed, and it’s best that this defective human product goes away as soon as possible.”

Negotiations between Washington and Pyongyang have been at a standstill since February, when a summit between North Korean leader Kim Jong Un and Trump broke down over what the United States described as the North’s excessive demands for sanctions relief in exchange for a partial surrender of its nuclear capabilities. Kim since then has said the United States has until the end of the year to come up with mutually acceptable terms for a deal to salvage the negotiations.

Bolton acknowledged that the United States has not been “hearing much from North Korea” since the summit in Hanoi, Vietnam. The U.S. special envoy to North Korea, Stephen Biegun, “can’t wait to talk to his North Korean counterpart, but they haven’t responded,” Bolton said, adding that Biegun was “ready at any point to get on a plane and go anywhere.”

The North Korean statement came as South Korea began its annual summertime defense drills involving thousands of civilians and troops. The drills have been modified to exclude large-scale military exercises with the United States that were suspended to create space for diplomacy with the North.

The four-day Ulchi Taeguk exercises will include massive civilian evacuation drills and a South Korea-only military drill aimed at preparing for war situations and disasters. /kga