Pangolins hunted to near extinction 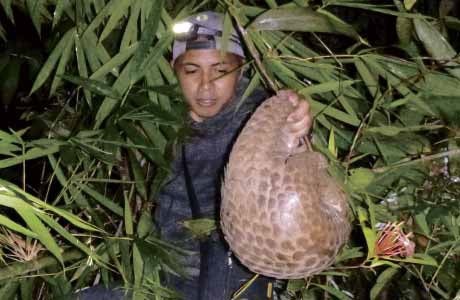 Guided by a local farmer or hunter and his dogs, they look for the endangered Philippine pangolin (Manis culionensis).

Little is known about this scaly mammal, only recently described as distinct from the Sunda pangolin.

One of the eight pangolin species, it shares the unfortunate fate of being the most trafficked mammal, due to high demand for its scales and meat in Asian markets.

The ground survey forms part of a research aiming to shed light on the Philippine pangolin, the least studied of eight species, before it is pushed to extinction.

The study is led by wildlife group Katala Foundation and funded by USAID Protect Wildlife, a five-year project for conservation.

With the Palawan Council for Sustainable Development and the Palawan State University (PSU), it aims to determine the Philippine pangolin population, habitat preferences and threats to aid policies and programs for its conservation.

The Philippine pangolin is described as endangered on the International Union for Conservation of Nature’s Red List. Yet no areas have been protected specifically for its conservation.

“We may have already lost about 85 to 95 percent of them, but this is only based on the perception of tribal leaders,” Batin said.

The research focuses on the Victoria-Anepahan Mountain Range, which straddles Puerto Princesa City and the towns of Aborlan, Narra and Quezon.

A big slice of the P4-million funding for the project is dedicated to the ground survey and camera traps set in several areas, covering over 6,000 hectares.

Researchers on the ground would document and capture the pangolins, noting various measurements.

The animals will later be released in the same area where they have been taken.

From September to December 2018, the team recorded 14 pangolins, including two pregnant ones, in a total surveyed area of 800 hectares.

Pastrana, 25, said the researchers’ work was not easy, walking as much as 20 ha every night.

Researchers, however, observed that threats to the animal’s habitats remain, such as slash-and-burn farming, or kaingin, timber poaching and charcoal making.

Interviews done by PSU with indigenous communities showed that poaching and illegal trade on pangolin meat and scales continue.

USAID Protect Wildlife says pangolin meat goes for $3 to $5 per kilo, while the scales, believed to have medicinal uses, sell for as much as $190 per kilo.

More than 30 camera traps have been set up in areas stretching 4,000 hectares.

So far, the cameras captured pictures of seven pangolins, but also other wildlife, such as the endemic Palawan peacock-pheasant, civet cat, and porcupine.

The researchers hope the numbers will rise. The final findings will be published by year-end, Batin said.

Partnership with upland indigenous peoples, she noted, would be very valuable, as they are the ones most familiar with the pangolin and the threats.

“We hope our research [will] help in the implementation and enforcement of wildlife law,” she said.