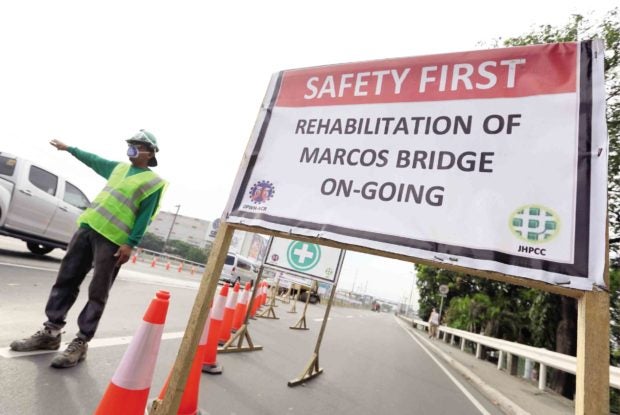 LONG COMMUTE AHEAD Around 6,400 motorists are expected to be affected by the shutdown of a portion of the Marcos Highway bridge which will undergo rehabilitation for a total of eight months. —NIÑO JESUS ORBETA

MANILA, Philippines — After a two-week delay, the eastbound portion of the Marcos Highway bridge was finally closed on Saturday by the Metropolitan Manila Development Authority (MMDA).

The four-month shutdown, according to MMDA general manager Jojo Garcia, was to give way to the rehabilitation of the 30-year-old structure.

Afterward, the MMDA will also close down the westbound portion for another four months to complete the repairs.

Around 6,400 motorists are expected to be affected since the bridge connects Quezon City to the cities of Marikina and Pasig, and Taytay and Antipolo City in Rizal province.

Originally scheduled to begin on May 11, the shutdown was moved to May 25 after the MMDA learned that the companies hired by the Department of Public Works and Highways for the P150-million rehabilitation project were not yet ready.

“But the contractors are now ready to push through with the rehabilitation after complying with the necessary requirements they need to address,” Garcia said.

He added that the MMDA could not delay the closure any longer as this would only contribute to worsening traffic conditions.

From Cubao, motorists may take Boni Serrano and then FVR Road straight to Macapagal Bridge, and then Marcos Highway to Antipolo City.

From Antipolo City, they may take A. Bonifacio Avenue straight to Aurora Boulevard; or take Marcos Highway then FVR Road straight to Boni Serrano Avenue.