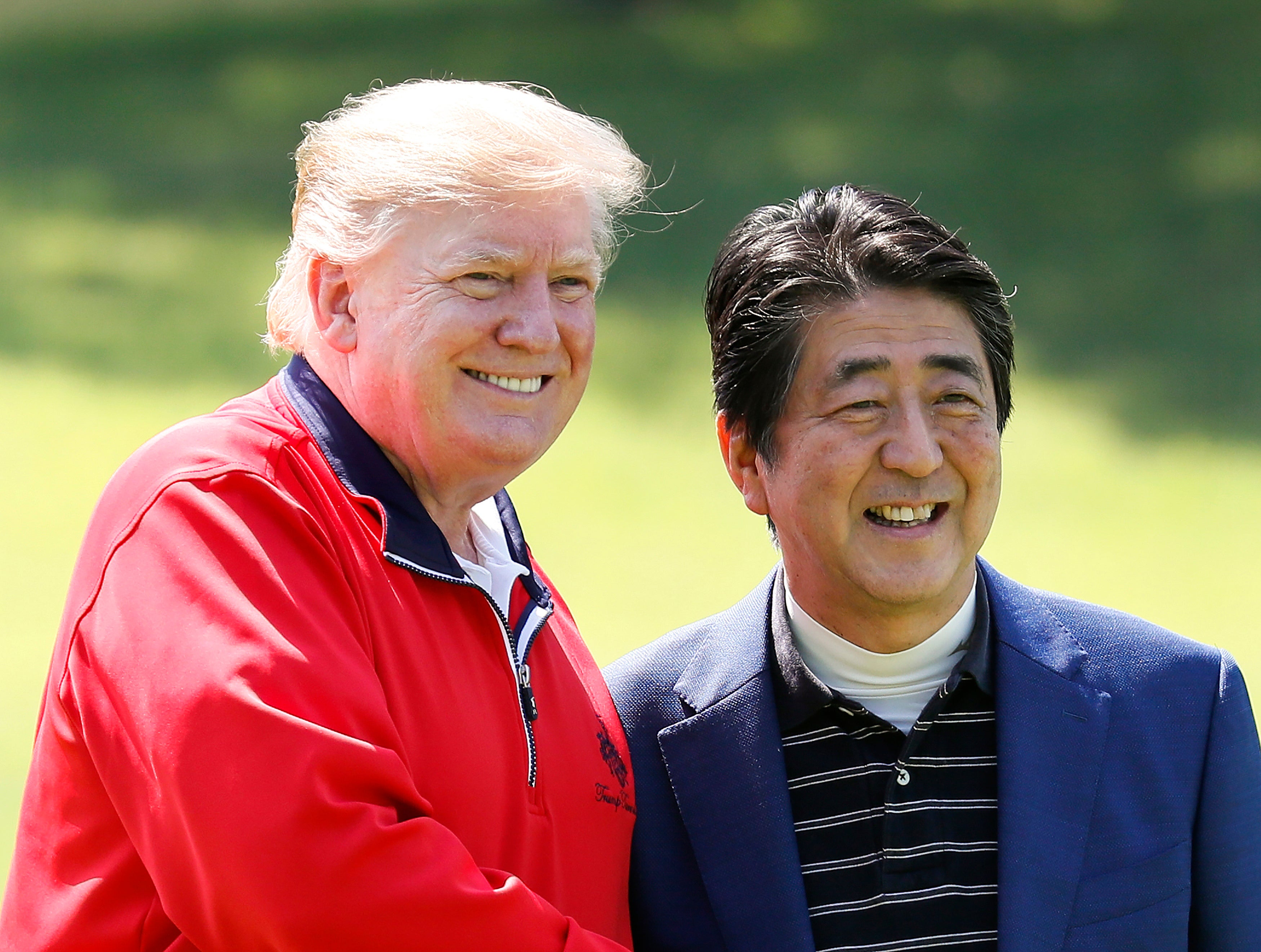 MOBARA, Japan — Golf never seems to be far behind whenever President Donald Trump and Japanese Prime Minister Shinzo Abe get together.

So on Sunday, during a four-day state visit to Japan, the president jumped aboard the Marine One helicopter in Tokyo and flew south to the Mobara Country Club for a steamy morning round with the Japanese leader.

Abe is Trump’s closest friend among world leaders and it’s the fifth time they played golf together since Trump took office. Abe’s strategy is to keep his country out of Trump’s crosshairs amid U.S.-Japan trade tensions and the continued threat North Korea poses to both nations.

Later in the day, Abe will introduce Trump to Japan’s ancient sport of sumo wrestling. The president will sit ringside at a championship match in Tokyo featuring the oversized athletes. He’ll also present the winner with his own “President’s Cup” trophy.

The leaders will also venture into Tokyo for a dinner double date with their wives.

A motorcade of golf carts ferried Abe to meet Trump when he arrived at the club. They exchanged a warm handshake, patted each other on the forearms and posed for a throng of journalists. Abe wore white pants and a dark blue sport coat. Trump wore a red half-zip pullover with a white shirt and dark pants. Japanese television later broadcast aerial footage of Trump swinging his club on the course.

They were joined by Japanese professional golfer Isao Aoki, who is famous for his putting technique. Aoki was expected to present Trump with a putter he designed.

Trump tweeted that he was “Going to play golf right now with @AbeShinzo. Japan loves the game.” Abe told reporters as he left for Mobara that Sunday’s weather was great for golf and “it seems we are in a good mood for sumo.”

He later tweeted a selfie photo of him and Trump, smiling widely on the greens.

Neither leader spoke to reporters at the club before they climbed into a golf cart with Abe at the wheel. Trump ignored a shouted question from a U.S. reporter about whether he believed North Korea had violated U.N. Security Council resolutions.

Earlier Trump downplayed North Korea’s recent series of short-range missile tests. He tweeted that the tests weren’t a concern for him — even though they most certainly are for Japan, due to the country’s proximity to the North.

“North Korea fired off some small weapons, which disturbed some of my people, and others, but not me,” Trump wrote in a message that appeared to undermine his national security adviser, John Bolton, who told reporters Saturday the tests violated U.N. Security Council resolutions.

Trump said he “has confidence” that North Korean leader Kim Jong Un “will keep his promise to me.”

The president’s attendance at the annual summer sumo tournament in Tokyo may bring back memories of the time he spent promoting the World Wrestling Federation. Trump is expected to sit ringside as the oversized men in loincloths grapple to win by pushing their opponents out of bounds or getting them to touch the floor with their body, except for the soles of their feet.

Trump has said he finds the sport “fascinating.”

Trump will also be presenting a hefty trophy to the winner. The trophy, which the White House dubbed “The Presidents Cup,” weighs between 27 and 32 kilograms. The White House put the cup on display in the lobby of a ritzy Tokyo hotel Sunday afternoon ahead of the tournament.

The president also sought to manage expectations that he and Abe will make significant headway on trade issues when they hold more formal talks on Monday. Trump has been seeking a bilateral trade agreement with Tokyo since he pulled the U.S. out of the multinational Trans-Pacific Partnership trade agreement two years ago, though analysts expect no breakthroughs during Trump’s visit.

Fox News Channel’s White House Correspondent John Roberts tweeted that Trump telephoned him Sunday morning in Tokyo and told Roberts that he intended to wait until after Japan’s parliamentary elections in July to push for a deal.

Trump had told business leaders after arriving in Tokyo on Saturday evening that the U.S. and Japan were “hard at work” negotiating a new bilateral trade agreement that he said would benefit both countries.

“With this deal we hope to address the trade imbalance, remove barriers to United States exports, and ensure fairness and reciprocity in our relationship. And we’re getting closer,” he said.

The Trump administration has been threatening Japan with new tariffs on imports of autos and auto parts on national security grounds. Trump has suggested he will impose tariffs if the U.S. can’t wrest concessions from Japan and the European Union. In April, Japan’s trade surplus surged almost 18% to 723 billion yen ($6.6 billion).

The president arrived in Japan on Saturday with his wife, first lady Melania Trump, to open the four-day visit.

On Monday, Trump will become the first head of state to meet with Japan’s new emperor, Naruhito, since he ascended to the throne on May 1. Trump and Abe will also meet in a more formal setting and participate in a joint news conference. In the evening, Trump will be guest of honor at a banquet hosted by the emperor at Japan’s Imperial Palace.

Trump is slated to head for Washington on Tuesday after he addresses U.S. sailors aboard the USS Wasp, stationed at Yokosuka.