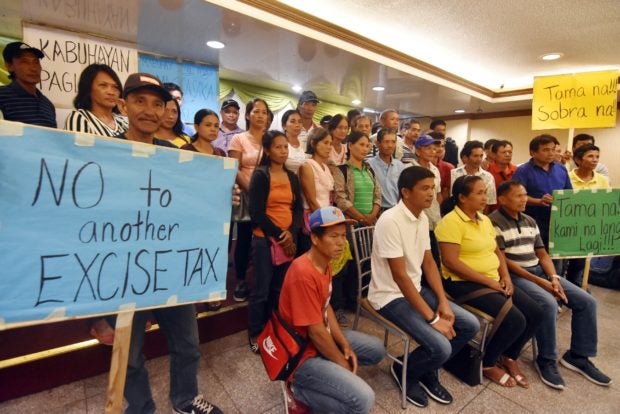 Tobacco farmers from Pangasinan, Ilocos Sur, and Ilocos Norte oppose another hike in sin tax, saying this will kill them and their families. (Photo by Willie Lomibao)

Saturnino Distor, president of the Philippine Tobacco Growers Association, said tobacco farmers were made to believe that the yearly hike in sin taxes was to enable the government to collect enough fund to finance government programs.

“But now, it is clear to us that the government’s intention in raising the sin tax is to kill us and the industry that sustains us,” said Distor at a press conference here.

Distor was here with about 50 tobacco farmers from the provinces of Pangasinan, La Union, Ilocos Sur, and Tarlac.

Last week, news reports quoted Dominguez as saying that the proposed sin tax increase from the present P35 to P60 for every pack of cigarettes was aimed at killing the cigarette industry.

The P60-sin tax increase is projected to decrease the number of people using tobacco from 23.8 percent in 2015 to 17 percent by the end of President Duterte’s term.

But the Senate has yet to approve the bill seeking to raise the excise tax on tobacco products.

“Doesn’t the government know that if they kill the tobacco industry, they will also kill farmers and their families?” Distor said. (Editor: Leti Z. Boniol)