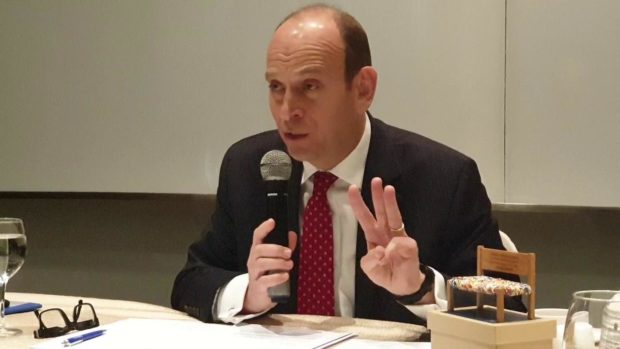 Amazed at the innovations of the Cebu City Public Library, British Ambassador Daniel Pruce said they were now working on how their government could help improve the 24-hour facility.

During his visit to Cebu on Thursday, May 23, Pruce took note of the movies being shown in the library at night, which were drawing attention from its patrons.

He said he was looking into the showing of British short films during the movie nights at the Library.

“They have midnight cinema shows and short films. I think it is a great way of bringing people into the library outside of usual hours,” Pruce said during a media briefing.

“(It is) demonstrating how the library can not only be a great repository of books but also of … other cultural activities,” he added.

Aside from access to British short films, Pruce said they were also coordinating with non-government organizations in Cebu City on how they could help improve the materials inside the library.

Pruce was in Cebu City for the first time for a meeting with several stakeholders, including the promotion of tourism to British visitors.

He said an increasing number of British tourists were visiting Cebu. There was also a growing British community in the city.

He discussed with local media ways to expand the British government’s campaign on Media Freedom and Responsibility.

The British Ambassador also went to the Mactan Cebu International Airport, whose construction was done with British experts.

He also dropped by Cebu Provincial Police Office for a meeting.

The concept to open the Library all day was a request through social media to Mayor Tomas Osmena from a student in 2018.

The mayor immediately gave in to the request and provided the library services 24/7 since then. (Editor: Leti Z. Boniol)