Kenya court to rule if gay relations are criminal acts 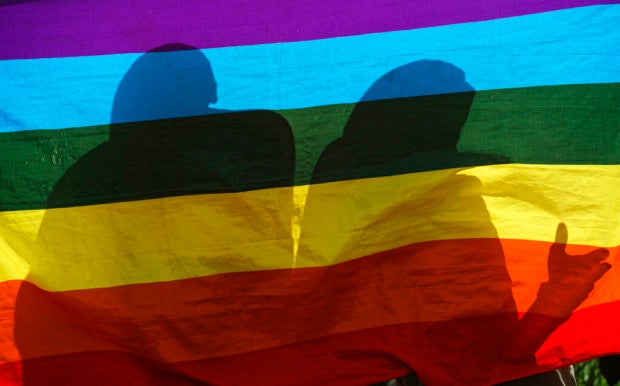 In this photo taken May 17, 2019, LGBT refugees living in Kenya stand behind a rainbow flag as they protest against their treatment by authorities, outside an office of the UN refugee agency UNHCR in Nairobi, Kenya. AP

NAIROBI, Kenya — On the eve of what could be a landmark ruling in Kenya on whether same-sex relations are crimes, gay rights activist and gospel singer Joji Baro says he is has no intention of returning home to the East African country.

No matter that fellow activists are optimistic that Kenya’s High Court will rule that the colonial-era laws criminalizing gay sex are unconstitutional. For the 28-year-old Baro, whose given name is George Barasa, the memories of discrimination, physical attacks, arbitrary arrests and being disowned by family for coming out are still fresh.

“Due to my sexuality, I lost my family and my friends,” he told The Associated Press from his current home in South Africa, where he said he has found “safer ground” for advocacy work.

His plight reflects the hardships of many people in the 33 African nations that outlaw homosexual activity, according to Human Rights Watch. In Kenya, people convicted of gay sex face up to 14 years in prison.

Friday’s court ruling in Nairobi is expected to be a watershed moment for LGBT equality, activist Eric Gitari said.

“It has the potential of creating a tidal wave across Africa, especially in the (countries in) Africa where the British colonial legacy of criminalization still persists,” he said.

Kenya’s courts, which many assume to be conservative on issues of sexuality, have recently ruled in favor of LGBT rights.

The court was to deliver its ruling on whether to decriminalize same sex relations in February, but then postponed it until May. The case stems from a petition filed by gay activists in 2016.

“Kenyans are a tolerant and curious lot,” Gitari said. Despite its laws, the country is a haven for LGBT refugees in East and Central Africa with a vibrant social movement and growing government interest in the health of gay people, he said.

However, negative stereotypes persist including the wrong beliefs that LGBT persons are all sex workers and all gay men have HIV, Gitari said. At least half of Kenya’s LGBT persons in Kenya have suffered physical and verbal assault, according to a survey by the National Gay and Lesbian Human Rights Commission. Most assaults are not reported because gays don’t have confidence they would get protection from the police, said Gitari.

Resistance to gay rights exists at the top of Kenya’s politics.

Gay rights are “not of any major importance” in the country, President Uhuru Kenyatta told CNN in an interview last year. He said the laws criminalizing same-sex relations are supported by “99 percent” of the Kenyan people.

The memories are still fresh: being punished as a child for “acting like a girl,” being kicked out of his home in his teens, facing physical attacks and the threat of arrest after launching a gay music video.
“For now, my focus is on rebuilding my life and creating a new family of my own,” he said. /ee