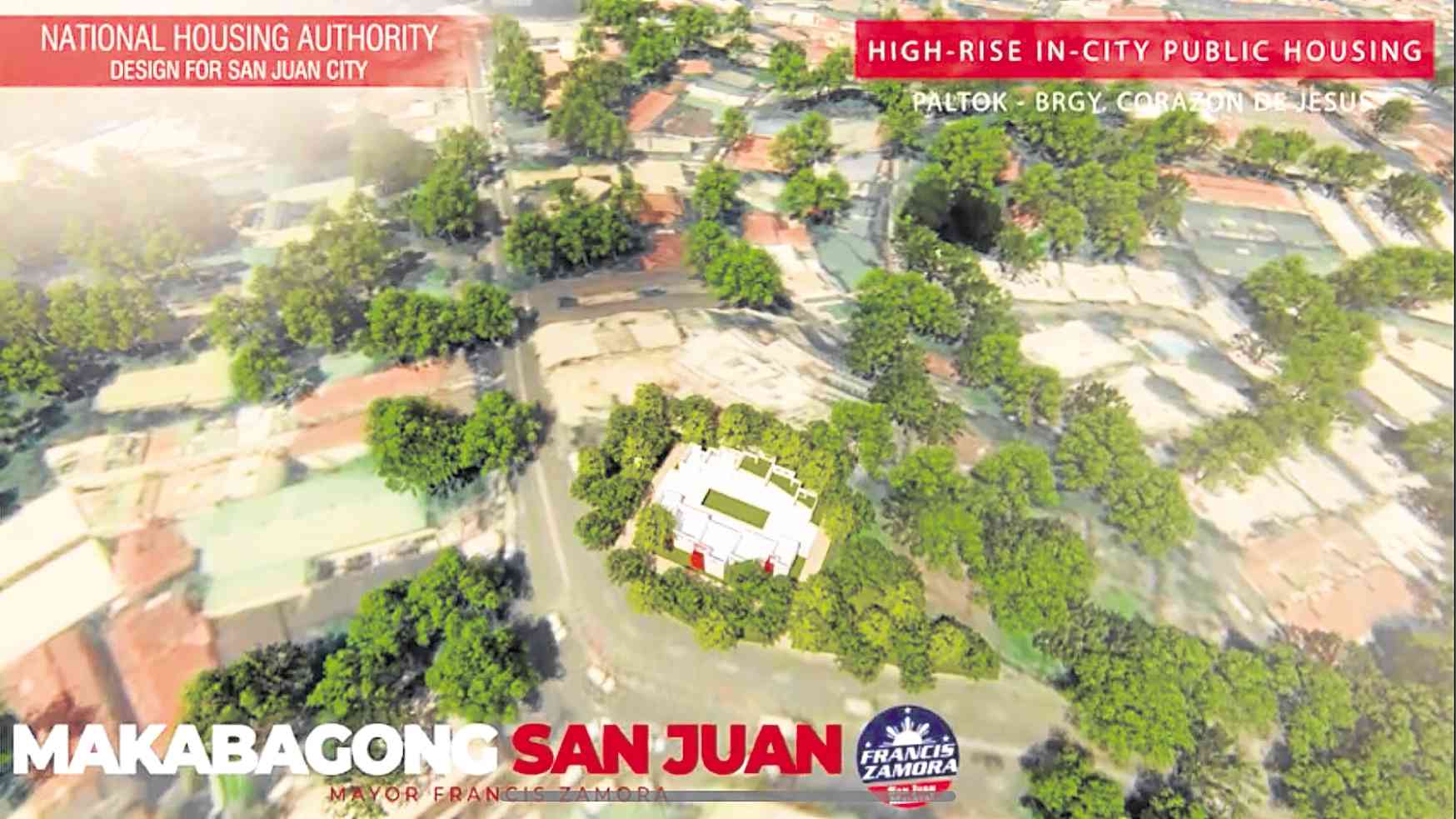 HOUSING PLANS Before and after visualizations of an area in Barangay Corazon de Jesus, where incoming Mayor Francis Zamora wants to build a high-rise housing complex. CONTRIBUTED PHOTO

MANILA, Philippines — When Karen Joy Peñaranda went to San Juan National High School on May 13, she had a bandage swathed around her knee and a makeshift bamboo cane gripped in her right hand.

A resident of Barangay Corazon de Jesus in San Juan City, Peñaranda had injured her knee just two days before during a volleyball game. “I still made it here just so I could vote for my mayor,” she said.

Her chosen candidate was former Vice Mayor Francis Zamora, who would eventually  be declared the winner.

Peñaranda harbored a deeply personal reason for her choice—her home, like many others in Corazon de Jesus, had been been torn down by the city government to make way for the expansion of City Hall.

Zamora’s path to victory can be traced by looking at the election results from similar barangays with a large population of informal settlers.

Despite their close proximity to City Hall, 60 percent of Corazon de Jesus residents voted for him — one of his best showings in the 18 villages where he won.

In an interview with the Inquirer on Wednesday, Zamora vowed that before the end of his first term in 2022, the low-cost, high-rise and in-city public housing he promised residents would be ready for occupancy.

“I met with the National Housing Authority [NHA] as early as February,” Zamora said. “What we presented [during the campaign] were NHA-approved designs and regulations. They weren’t just pieces of fiction.”

He said the housing units would have “dignity,” meaning he would not try to stuff families into cramped spaces just for the sake of saying he had a housing program.

The high-rise buildings, which could go up to 22 stories, would be “something you really want to go home to live in,” he added.

His staff has already started taking an inventory of all available government land in San Juan while coordinating with NHA about funding.

Because the housing program would drain the city’s P2.5-billion budget, Zamora said he and his father, San Juan Rep. Ronny Zamora, were working to have it included in the national budget.

They have already found several potential sites for the buildings in Barangays Corazon de Jesus, St. Joseph and Batis, he told the Inquirer.

St. Joseph was wiped out by a fire in 2012 and still had comparatively large sections of open space, a rarity in the densely packed city.

Batis, which like Corazon de Jesus has a sizeable informal settler population, also gave Zamora 60 percent of its votes.

The two barangays are the second and third most vote-rich areas in San Juan, after West Crame, helping to seal Zamora’s 10,000-vote lead over Janella Ejercito Estrada.

Corazon de Jesus made headlines in 2012 when the demolition of hundreds of homes to make way for San Juan’s city hall devolved into a brutal, violent spectacle. While residents lobbed molotov bombs, the police replied with tear gas.

“I guess they will never forget,” Zamora said. “Imagine the trauma they experienced.”

Peñaranda, who has lived in Corazon de Jesus for two decades, and other residents that formed the spine of Zamora’s winning coalition will be watching closely to ensure he delivers for them.

“We’ve tried and tested the Estradas,” Peñaranda said. “It’s time for something new.”