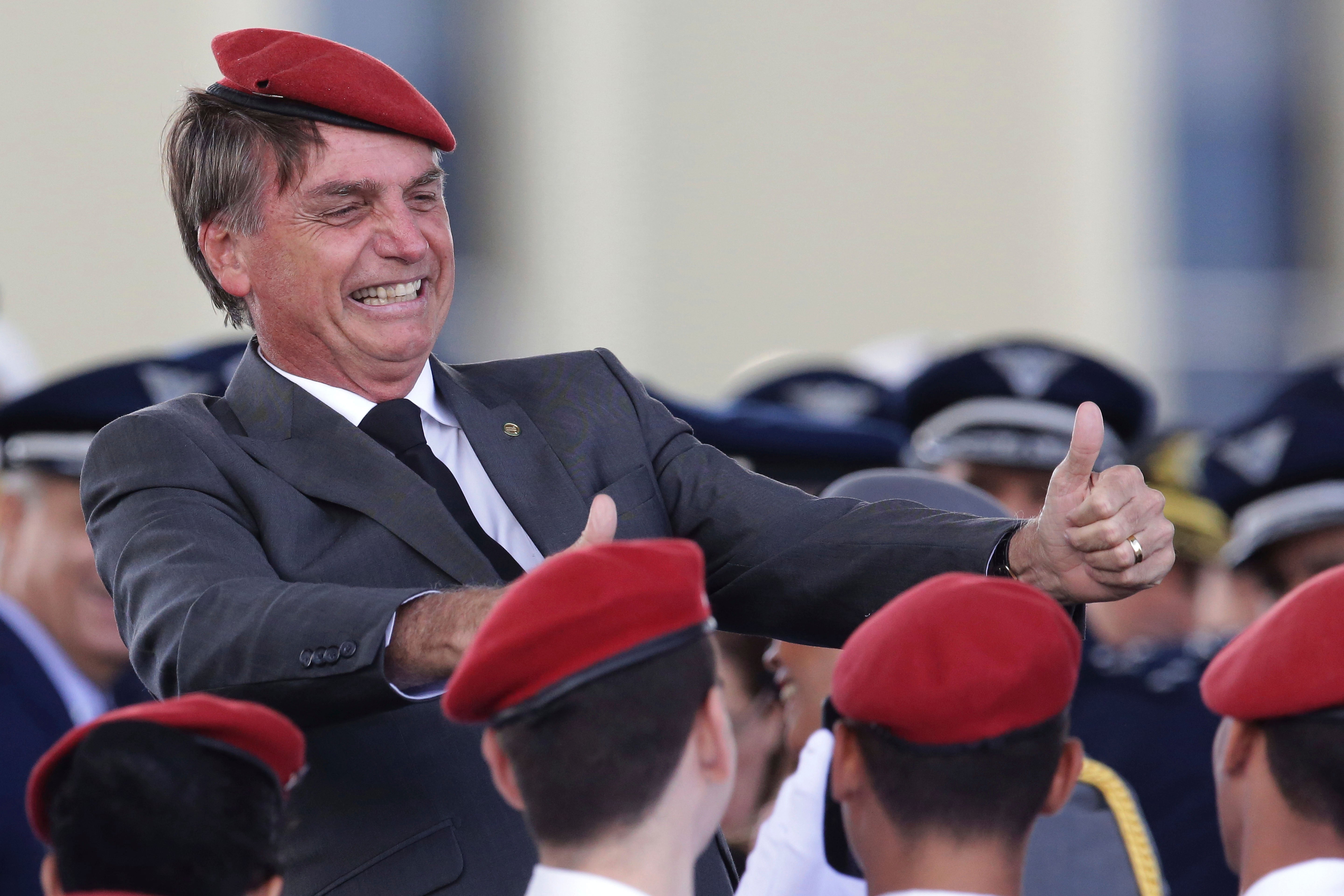 In this April 19, 2018 file photo, presidential hopeful, conservative lawmaker Jair Bolsonaro flashes two thumbs up as he poses for a photo with cadets during a ceremony marking Army Day, in Brasilia, Brazil. Bolsonaro, a former Army captain who waxes nostalgically about the dictatorship, is second in the polls behind da Silva, who is jailed and likely will not be able to run. (AP Photo/Eraldo Peres, File)

The group said Bolsonaro’s “anti-human rights” rhetoric throughout his career is now “being translated into concrete measures and actions that threaten and violate the human rights of all people in Brazil.”

The letter outlined measures like Bolsonaro’s moves to ease gun laws, a tougher new drug policy and what it said are attempts “to interfere unduly in the work of civil society organizations.”

It also said Bolsonaro, who took office Jan. 1, is infringing on the rights of Brazil’s indigenous people and communities of the descendants of enslaved people.

Amnesty’s Brazil executive director, Jurema Werneck, noted that when Bolsonaro was elected, the organization warned of the risk that the far-right politician represented to human rights.

“We are beginning to see that our concerns were justified,” she said.

Erika Guevara-Rosas, the Amnesty International Americas director, said Bolsonaro’s actions are a part of a worrying trend in the region.

“It is an extremely delicate time in the Americas,” she said, citing Central Americans in need of protection in the United States and leaders accused of promoting violence and persecuting opponents in Venezuela and Nicaragua.

Bolsonaro’s ministry of women, family and human rights responded to Amnesty International, saying they wanted to promote dialogue with the NGO to show that the their statements weren’t true.

“There was no evidence that any of the accusations are based on data or concrete events,” the statement read.

Also on Tuesday, governors from 13 of Brazil’s 26 states published a letter protesting the decree that Bolsonaro signed to loosen gun laws. The decree increases annual ammunition purchase limits and gives the right to carry a gun in public without permission for people ranging from the federal police to professions like truckers, elected politicians and journalists.

“We do not think the measures outlined in the decree will help make our states safer, quite the opposite, these measures will have a negative impact on violence,” the governors wrote.