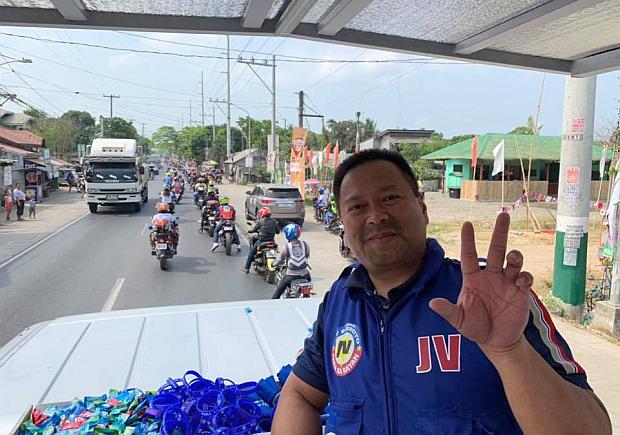 Ejercito said he was happy for the winners, but he felt a bit sad he was not among them.

“Pero wala kong bitterness at all,” he said in an interview at his office in the Senate.

[But I have no bitterness at all.]

His only regret, he said, was that he did not talk to his family as he allowed his pride and emotions to prevail.

[So that’s my only regret — I didn’t talk to them. I guess my emotions prevailed, my pride prevailed back then.]

“Sana naiwasan kung sakaling nagka-ayusan. Kung halimabawa na ako lang tumakbo, I could have saved everybody. Kaya lang hindi naman ako ang nag-insist,” he added, referring to the losses that his relatives incurred in the May 13 elections.

[We could have avoided that if we had come to an agreement. If, for example, it was only me who ran, I could have saved everybody. But then I wasn’t the one who insisted.]

“Ang pinakanalulungkot ko, I really love this job,” Ejercito said, noting how he loved to participate in budget hearings. “Nakakalungkot lang it was taken away from me by, I’d say, a poor family decision of allowing a lot of people to run in the family.”

[What I really feel sad about is that I really love this job. It makes me sad that it was taken away from me by, I’d say, a poor family decision of allowing a lot of people to run in the family.]

Asked if he was blaming his loss to the fact that he and his half-brother both ran at the same time, Ejercito said: “Oo, wala namang iba. [Having] two national candidates is just too much. Yung isa nga lang mahirap na. Eh dinalawa mo pa.”

[Yes, there’s no other reason. Having two national candidates is just too much. Having one is hard enough. All the more that there were two.]

If he could get a chance to talk to his father, former President Joseph Estrada, Ejercito said he would explain everything to him.

[That’s in order for him not to be sad thinking that the people really no longer wanted him. That’s not it. In my view, we were just fighting so many battles at the same time — which is wrong.]

Even the former President lost in his re-election bid as mayor of Manila.