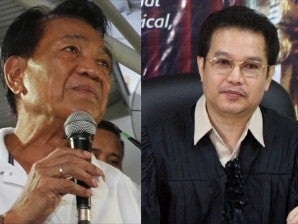 MANILA, Philippines—Former Commission on Elections Chairman Benjamin Abalos sought Friday the inhibition of Judge Jesus Mupas from the trial of electoral sabotage charges against him,  claiming that  emissaries from the judge had tried to extort millions of pesos from him.

Abalos testified at Friday’s bail hearing at the Pasay Regional Trial Court’s Branch 112 that emissaries allegedly sent by Mupas had tried to extort P100 million and  P30 million on separate occasions in exchange for favorable rulings on his motions.

Friday’s hearing was intended to resolve the motions filed by Abalos asking that he be allowed to post bail and for him to be held under house arrest instead of a regular jail.

Abalos, former President Gloria Macapagal-Arroyo and a couple of other people, have been charged with electoral sabotage, a no-bail offense, for allegedly rigging the results of the 2007 senatorial elections.

Read Next
Sendong slightly intensifies
EDITORS' PICK
House energy committee chair Arroyo bats for cheap electricity
PH detects local transmission of Omicron subvariant BA.2.12.1
OVP: Pilot’s claim vs Robredo ‘never happened’, a ‘malicious fabrication’
Honolulu Café is the cure for your Egg Tarts and Roastings cravings
Petition to reverse Comelec decision on Bongbong Marcos’ DQ case reaches SC
Luxe property: A way to build, preserve wealth
MOST READ
Heart Evangelista gets a ‘no’ from Chiz Escudero after asking, ‘Do I deserve a bag?’
Congress canvassing of votes for president, VP to begin May 24
Man posing as Marcos spox revealed to be an inmate in Bilibid — Guevarra
Marcos DQ petitioners told: ‘Learn to respect will of the Filipino people’
Don't miss out on the latest news and information.