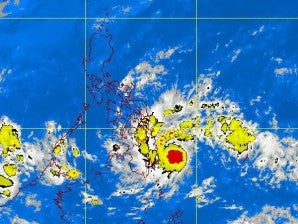 In its latest bulletin, Sendong was last seen 180 kilometers east southeast of Hinatuan, Surigao del Sur with maximum winds of 75 kilometers per hour near the center and gustiness up to 90 kph.

Estimated rainfall amount was from 10 to 25 mm per hour (heavy) within the 400-kilometer diameter of Sendong, Pagas added.

It was expected to make landfall early this afternoon over Davao Oriental by Friday afternoon;