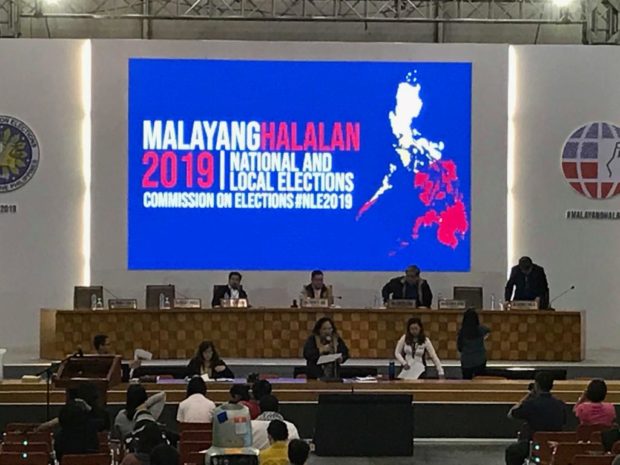 MANILA, Philippines — If this three Catholic bishops would have it their way, they would prefer the Commission on Elections (Comelec) to launch and finish its thorough investigation on reported irregularities in the May 13 elections first before proclaiming the winners.

Auxillary Bishop of Manila Bishop Broderick Pabillo, Bishop Gerardo Alminaza of San Carlos, and Bishop Antonio Tobias of Novaliches on Tuesday came out with a joint letter saying they join calls for the suspension of the national canvassing and eventual proclamation of winners in the national elections, citing questions surrounding the recently held polls.

“We, the undersigned Bishops, see fault in the conduct of the recently concluded elections, with overwhelming accusations of tampering in the 2019 elections and manipulation of results,” the bishops said.

“It is in light of these questionable conduct and justifications that we join the clamor of people and civil society groups for COMELEC to suspend the national canvassing and proclamation. Until an impartial investigation is made, our country will not be able to find closure on the questions of integrity and credibility of the results of this election process,” they added.

On Wednesday morning, the Comelec, sitting as National Board of Canvassers, has formally proclaimed the “Magic 12” in this year’s midterm elections.

Meanwhile, proclamation of winners in the party-list contest are set Wednesday night.

This was seconded by Comelec Spokesperson James Jimenez, who urged the Catholic Bishops’ Conference of the Philippines (CBCP) – who also previously called for the suspension of proclamation – to file a formal petition.

In their letter, the three bishops enumerated four issues that, according to them, Comelec should look into:

Apart from these, they also pointed out that Comelec must investigate its supposed non-transmittal of partial and unofficial results to the Parish Pastoral Council for Responsible Voting (PPCRV) transparency server.

“These irregularities and possible logistical tamperings already cast doubt to the reliability of the election results,” the bishops noted. “But the credibility of the results were made even more unreliable after the seven-hour sudden blackout in the transmission of Election Results.”

“Such a phenomenon is unprecedented after years of conducting automated elections. And it is even more unnerving that this happened after the National Citizens’ Movement for Free Elections (NAMFREL) was denied full access to the data needed to ensure the credibility of the elections,” they also said. (Editor: Katherine G. Adraneda)