JAKARTA, Indonesia – Supporters of an unsuccessful presidential candidate clashed with security forces and set fire to a police dormitory and vehicles in the Indonesian capital on Wednesday after the release of official election results.

He said Wednesday that dozens of people were detained. 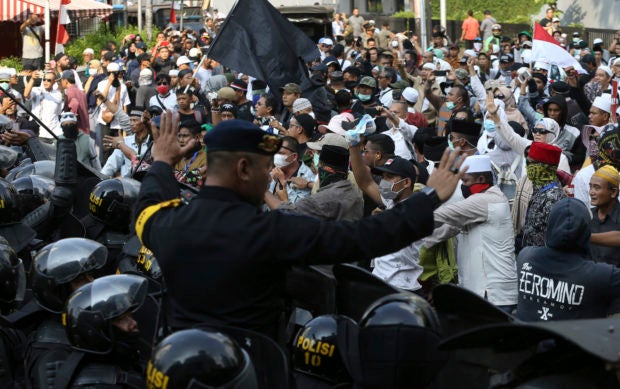 Indonesian police officers block supporters of Indonesian presidential candidate Prabowo Subianto during a rally outside the Elections Supervisory Agency (Bawaslu) building in Jakarta, Indonesia, Tuesday, May 21, 2019. Indonesia’s President Joko Widodo has been elected for a second term, official results showed Tuesday, in a victory over a would-be strongman who aligned himself with Islamic hardliners. (AP Photo/Achmad Ibrahim)

KompasTV showed protesters throwing rocks, a paramilitary police dormitory on fire, and hundreds of riot police in a central neighborhood of the city.

Indonesia’s Election Commission on Tuesday said President Joko Widodo had won a second term with 55.5% of the vote in the April 17 election.

His opponent, former general Prabowo Subianto, has refused to accept the results and declared himself the winner.

His campaign plans to challenge the election in the Constitutional Court. They allege massive fraud but have provided no credible evidence.