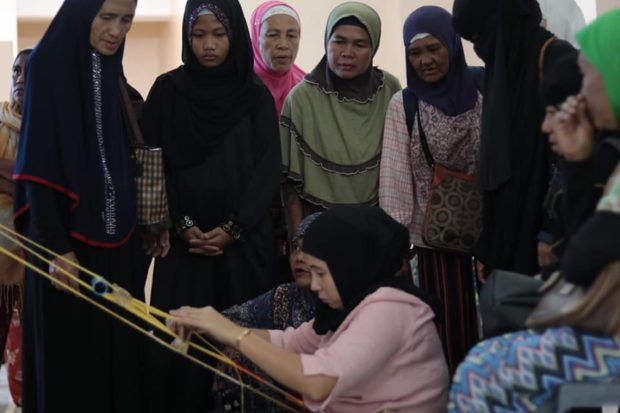 FABRIC OF NEW LIFE Weaving has helped women of Marawi overcome the dark part of their lives when they suffered tremendous emotional distress during the siege of the city by Islamic State-inspired militants two years ago. —PHOTO COURTESY OF SINAGTALA

MARAWI CITY, LANAO DEL SUR, Philippines — The cold morning mist near the tent city of Marawi, home to thousands of displaced people from the siege two years ago, brings a new beginning for Soraida Bato, 46, a weaver and mother of three.

What she feels will shape her design for a meter-long handwoven cloth, put to life by 12 colorful threads, sans black.

“Black brings back our painful past from the terror group Isis,” she said, referring to the Islamic State (IS)-inspired militants who took over sections of this predominantly Muslim city in 2017, triggering five months of fighting that reduced Marawi to rubble.

“I’m afraid the siege also killed our sense of history (reflected) through our handmade craft, as elder weavers lost their prime,” she said.

But she and a number of new weavers among the displaced mothers languishing in cramped tents refused to let that happen.

They are being assisted in keeping alive this tradition handed down through the generations by Sinagtala, a nonprofit helping internally displaced people (IDPs) with focus on women and children. They are also provided a space for weaving at the provincial capitol.

Bato, a breast cancer survivor, said weaving helped her overcome that dark chapter in her life.

“Every time I weave, I forget my problems and worries,” she said.

She said her family’s house in the main battle zone was destroyed. “We have nothing left except my children. They are my only priceless possession,” she said.

Her all-new design, which speaks so much of her strong and proud Maranao bloodline, is dominated mostly by maroon, green and blue—to illustrate a peaceful and prosperous life. Other women use royal blue and deep purple with yellow and white accents.

No one uses black because it is the militants’ color.

Sinagtala coordinator Charlene Hibaya Pendang said her group wanted to help bring back the women’s interest in weaving, which was turning into a dying art.

It started organizing the women during the siege of Marawi after seeing how helpless they were at the provincial capitol evacuation site.

Sinagtala, the Filipino word for “starlight,” reflected the group’s vision of bringing sparks of hope to the communities in Mindanao living in dark and conflicted times.

“It’s like you have a cup full of coffee and these women own cups that are empty. We are just sharing what we have and help them stand on their own to find their own lights,” Pendang told the Inquirer.

Only five of the 20 women that composed Sinagtala at the start remained. They started training more than 50 other jobless Maranao women last month with a vision to strengthening the social fabric in times of conflict through the rights-based approach to humanitarian support.

“We are not giving them money, just the kit for weaving and that includes the threads,” she said.

According to the United Nations’ Office for the Coordination of Humanitarian Affairs (OCHA) about 66,000 individuals remain displaced.

Mark Bidder, OCHA-Philippines chief, said an estimated 52,900 of them were living with their relatives. About 4,500, or more than 900 families, were still sheltered in four evacuation centers, he said in a report.

Marawi was once one of the most picturesque cities in the Philippines until pro-IS Maute and Abu Sayyaf militants attacked the Islamic city on May 23, 2017, in a bid to carve out their own “Wilayah,” or province.

About half of the city is now charred concrete and skeletons of buildings, the effects of 154 days of air and artillery strikes by the military, and booby traps the militants laid everywhere to keep soldiers at bay.

The fighting uprooted more than 350,000 people in what became the Philippine military’s toughest and longest conflict since World War II.

“We had a comfortable life before. Now, we live in between shelters, enduring heat, the lack of water, the lack of everything,” he said.

Hundreds of militants, 165 soldiers and at least 45 civilians were killed in the five-month conflict.

President Duterte in October 2017 declared the city liberated, and its rehabilitation officially under way, but 19 months later and just days to the siege’s second anniversary, rehabilitation has not started.

Bangon Marawi (Rise Marawi), an interagency task force in charge of reconstruction, has a deadline of 2021 for rebuilding and remains confident of meeting that.

The task force has so far transferred at least 8,600 people to transitional shelters, OCHA data showed.

“They still need support like water and livelihood while transitioning (to normal lives),” she told the Inquirer.

Thousands of people are in limbo following a conflict that no one saw coming.

Most are jobless and dependent on relief goods, like Noronisah Laba Gundarangin, a mother of three, who lives with four other families in her sister’s home.

The P73,000 her family received from government agencies isn’t enough for a small business. They have debts to pay and children to feed.

Gundarangin, 40, wonders what happened to all the aid and money pledged by the international community when the war was in the spotlight. The authorities say not all of that has materialized.

“I know billions (of pesos) were donated to Marawi but they go through so much bureaucracy that by the time it reaches us, they are pennies,” she said. —With a report from the wires