MANILA, Philippines — An Angeles City Court has barred from leaving the country Dennis Sytin and two other suspects in last year’s killing of businessman Dominic Sytin in Subic.

The Court said after examining the affidavit of Rommel Sytin and other supporting affidavits and documents, “there is a probable cause that respondents Dennis L. Sytin, Oliver D. Fuentes alias Ryan Rementilla, and Edgardo Luib will depart from the Philippines to evade arrest and prosecution of crime against them.”

“This Court hereby orders the Commissioner of the Bureau of Immigration to hold the departure from the Philippines of the above-named respondents at any Philippine airports and ports and to include their names in the hold departure list of said office,” read the Court’s order.

DOJ prosecutors made the request for a PHDO before the Court after it granted the motion filed by the victim’s wife, Ann Marrieta.

The younger Sytin, Fuentes, and Luib are facing murder and frustrated murder for the killing of Sytin and the wounding of his driver, Efren Espartero Jr. in front of the Light House Hotel inside the Subic Bay Freeport Zone last November 28, 2018.

Luib was arrested in Sto. Tomas, Batangas last March 5 due to existing arrest warrants over murder cases he is facing, including the killing of journalist Mae Magsino and Municipal Councilor Michael Caringal of Bauan, Batangas.

He then executed an extrajudicial confession and pointed to Dennis as the one who masterminded the hit on his elder brother, who at the time of his murder, was the chief executive of the United Auctioneers Incorporated (UAI).

Dominic also has other businesses such as United Holdings Power Corporation, which is into renewable energy. Luib also tagged Fuentes in the killing.

Fuentes was formerly employed at the UAI before he was fired by Dominic for allegedly embezzling P1 million from the company.

The younger Sytin has denied any hand in the killing of his brother, saying Luib was a “polluted source,” motivated by “self-preservation.”

He pointed out that despite their differences, Dominic is still his brother and he would never wish him ill, more so his death.

The DOJ panel of prosecutors, meanwhile, has wrapped up the preliminary investigation on the case and submitted the case for resolution. (Editor: Julie Espinosa) 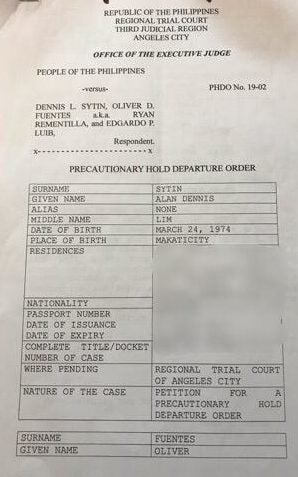 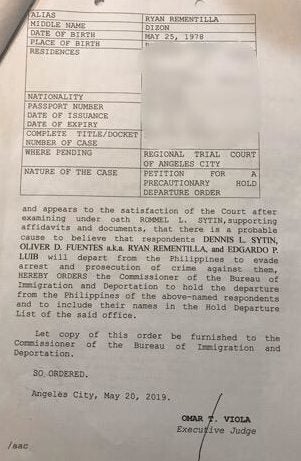