Alitalia cancels more than 300 flights due to strike

MILAN – Italy’s struggling airline Alitalia has canceled over 300 flights because of a 24-hour strike called to protest deteriorating conditions in the sector, including the government’s failure to relaunch the carrier.

Alitalia says it cancelled about half of its flights, both domestic and international, due to the strike Tuesday. 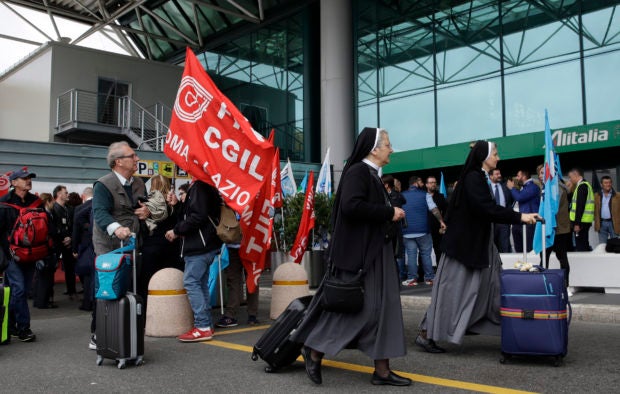 Nuns and other passengers pass in front of striking Alitalia workers with unions flags and banners, at the Fiumicino airport in Rome Tuesday, May 21, 2019. Alitalia workers are on a 24 hours strike since Monday night. (AP Photo/Allessandra Tarantino)

But it says it has reorganized schedules so that at least half of the affected passengers could fly the same day.

The country’s main transport union called the 24-hour strike to push for a deal that will guarantee the future of Alitalia, but also more generally for the renewal of a national contract and other measures to support workers. /gg