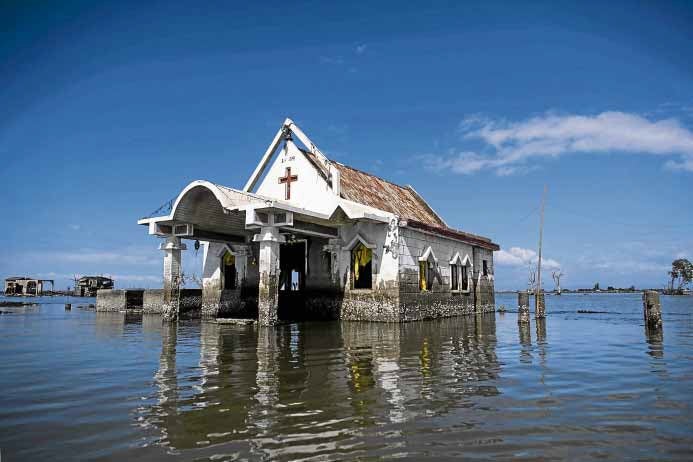 SCENE OF SUBSIDENCE Groundwater pumped out from unregulated wells has caused subsidence, resulting in sinking areas, like this village in Pariahan, Bulakan, Bulacan province. —AFP

MANILA, Philippines — When Mary Ann San Jose moved to Sitio Pariahan in Bulakan town, Bulacan province, more than two decades ago, she could walk to the local chapel. Today, reaching it requires a swim.

The main culprit is catastrophic subsidence caused by groundwater being pumped out from below, often via unregulated wells for homes, factories and farms catering to a booming population and growing economy.

The steady sinking of coastal towns and islets like Pariahan in Bulakan, a coastal town, has caused Manila Bay’s brackish water to pour inland and displace thousands, posing a greater threat than rising sea levels due to climate change.

“It was so beautiful here before… Children were playing in the streets,” San Jose said, adding: “Now we always need to use a boat.”

Most of the former residents have scattered to other parts of the region. Just a handful of families remain in Pariahan, which had its own elementary school, a basketball court and a chapel before the water flowed in.

These days, just the flooded chapel, a cluster of shacks on bamboo stilts where San Jose lives with her family, and a few homes on a bump of land remain.

The children that live there commute 20 minutes by boat to a school inland and most of the residents eke out a living by fishing.

Bulacan and nearby Pampanga province have sunk between four and six centimeters (1.5-2.4 inches) annually since 2003, according to satellite monitoring.

“It’s really a disaster that is already happening… It’s a slow onset disaster,” said Narod Eco, who is part of a group of scientists tracking the problem.

By comparison, the UN estimates average sea level rise globally is about three millimeters per year.

The creeping bay waters put people and property at risk, while the threat is amplified by high tides and flooding brought by the roughly 20 typhoons that pound the archipelago every year.

Some areas have raised roads in an effort to keep up with the sinking, creating odd scenes where the street surface is at the height of door knobs on roadside buildings.

At least 5,000 people have been forced out of the mostly rural coastal areas north of Manila in recent decades as the bay water has moved further inland, regional disaster officials told Agence France-Presse (AFP).

The sinking is very likely permanent because the ground in the hardest hit areas is mostly clay, which sticks together after the water is pulled out.

The fate of places like Pariahan provides a preview of the problems that may await some of Metro Manila’s 13 million people.

Sections of Manila along the shore of the bay are sinking too, with excess groundwater pumping being the most likely cause, Eco, the researcher, told AFP.

The subsidence there though is at a slower rate than the northern coastal communities, potentially due to less pumping or differences in the soil, he added.

A moratorium on new wells in the metropolis has been in place since 2004. But enforcing that ban as well as shuttering existing illegal wells, falls to the National Water Resources Board and its roughly 100 staffers who are responsible for policing the whole country.

“We have insufficient manpower resources,” the board’s director, Sevillo David, told AFP. “It’s a very big challenge for us, but I think we are doing the best we can.”

The demand for water has soared as Metro Manila’s population has nearly doubled since 1985, and the size of the nation’s economy has expanded roughly tenfold over the same period.

This explosive growth has created a ravenous demand for water, especially in the agriculture and manufacturing industries to the north of the capital.

“The sinking is a very serious threat to people, their livelihoods and cultures,” said Joseph Estadilla, a spokesperson for alliance seeking to protect Manila Bay coastal communities.

“This is only going to get worse in the near future,” he insisted.

Manila and its surroundings are among several major cities, especially in Asia, under threat as the land collapses beneath them, though the causes for this vary.

Cities such as Jakarta — which is sinking 25 centimeters (0.8 feet) each year — Bangkok and Shanghai risk being inundated within decades as a mixture of poor planning, more violent storms and higher tides wreak havoc.

In Jakarta, a city of 10 million people that sits on a confluence of 13 rivers, half the population lacks access to piped water, so many dig illegal wells to extract groundwater.

Yet in Pariahan the residents who remain are doing what they can to stay in a place they call home.

San Jose explained: “Every year we raise (the floor) of our house. Now my head almost reaches the ceiling.”