2 Philippine eagles to fly in Singapore under wildlife loan deal 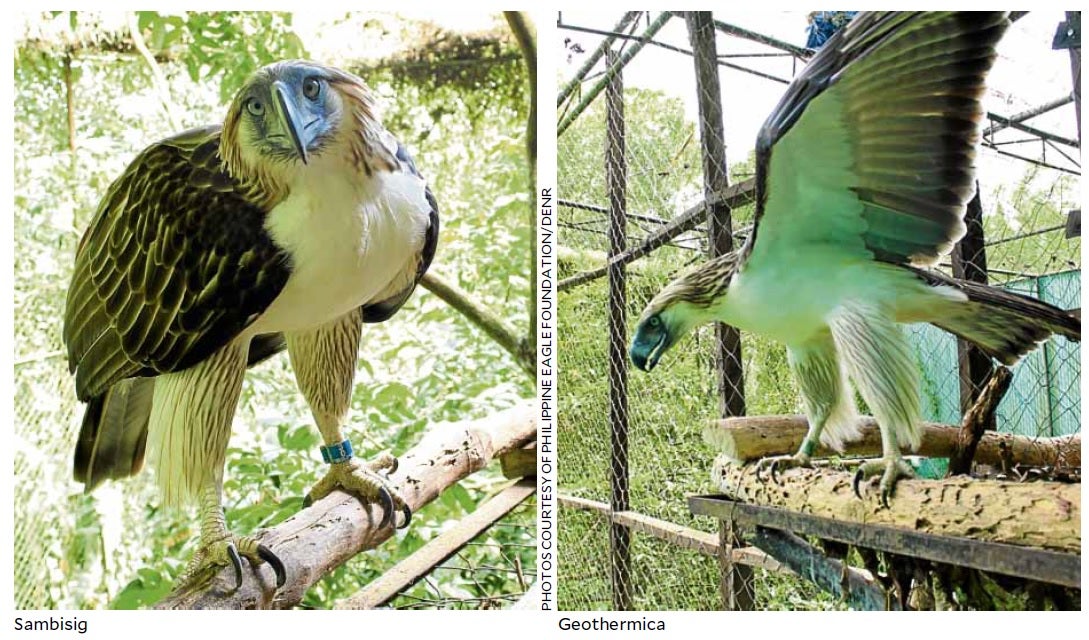 MANILA, Philippines — A pair of critically endangered Philippine eagles (Pithecophaga jefferyi) will be flown to Singapore next month in a first-of-its-kind arrangement between the Philippines and a foreign institution, as part of efforts to conserve the country’s national bird.

The raptors, born in captivity at the Philippine Eagle Center in Davao City, will be brought on June 4 to their new home in Jurong Bird Park, the largest bird park in Asia managed by Wildlife Reserves Singapore (WRS).

On Monday, the Department of Environment and Natural Resources signed a wildlife loan agreement with WRS, which would allow the transfer and conservation breeding of the eagles in the bird park.

Environment Secretary Roy Cimatu said sending the pair to Singapore was a “biosecurity measure” to ensure the survival of the species.

They and their possible offspring will serve as a fallback population should there be catastrophic events such as disease outbreaks and extreme natural calamities in their habitats in the country.

“This serves as an insurance policy for our eagles, so that if something bad happens to our captive population here, we have a set of gene pool outside of the country that we can rely on and continue propagating,” said Dennis Salvador, executive director of the Philippine Eagle Foundation.

One example of potential outbreaks, he said, was avian influenza that hit parts of the country in 2017, which killed at least 37,000 birds in Central Luzon.

Under the deal, 15-year-old male Geothermica and 17-year-old female Sambisig will serve as ambassadors for Philippine biodiversity conservation.

While expected to stay in Singapore in the next 10 years, both eagles, as well as any potential offspring, would remain the property of the Philippine government.

WRS is expected to provide technical and financial assistance for possible release of their progenies in the Philippines.

International support will also be given by the Singaporean organization for the country’s conservation program, including potential staff exchanges for training and capability building.

“The Philippine eagle is the crown jewel of Philippine biodiversity, an integral part of our rich heritage,” Cimatu said. “We are confident that this [agreement] will further strengthen Philippine-Singapore relations in the conservation of our biodiversity heritage.”

WRS made the pitch for a conservation plan for the birds in 2016, having previously worked with various local groups for the protection of other key species, such as the Luzon bleeding heart, the Philippine cockatoo and the Palawan pangolins.

One of the largest eagles in the world in terms of length and wing surface, the Philippine eagle is a critically endangered raptor on the International Union for Conservation of Nature’s Red List.

It is also listed under the Philippine National List of Threatened Species.

With hunting and loss of forest habitat as primary threats to its survival, less than 400 pairs remain in the wild.

A breeding pair requires up to 13,000 hectares of forest territory and rears only a single offspring every two years.

The eagle center in Davao holds 32 raptors, 19 of which were captive-bred.

Cheng Wen-Haur, WRS deputy chief executive officer, said the birds would be quarantined for one month, before being separately put on display.

After a few weeks, they will be placed together for potential breeding.