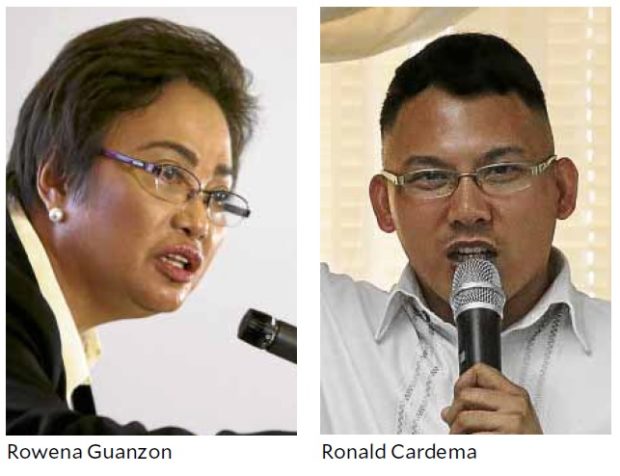 A top official of the Commission on Elections (Comelec) pointed out on Monday that Cardema’s bid to become the official nominee of the Duterte Youth party list group was still pending with the poll body.

The application for substitution he filed hours before voters went to the polls on May 13 “has not yet been approved” by the Comelec en banc, Commissioner Rowena Guanzon said in a Twitter post.

Also on Monday, several groups opposed Cardema’s substitution in a petition they filed in the Comelec, saying that Duterte Youth was gaming the party list elections and that the 11th-hour substitution violated a Comelec rule.

On Facebook, Cardema already referred to himself as an “incoming congressman.”

In a post on Monday, he even promised his supporters that he would work for the revival of the mandatory Reserved Officers’ Training Corps, death penalty for heinous crimes and “many more youth-related and national security-related legislative measures.”

Cardema survived a chorus of calls in February for his resignation — and searing criticism even from administration allies — after he suggested that students in state universities who joined antigovernment protests should be stripped of scholarships.

The National Union of Students of the Philippines criticized him for other abuses, including “using NYC as a platform to endorse administration-backed senatorial candidates, Red-tagging legal student organizations and being silent on pressing youth concerns.”

On Monday, presidential spokesperson Salvador Panelo said Cardema was deemed “automatically resigned” when he filed his application for substitution hours before election day. The five nominees of Duterte Youth, who included his wife and relative, had supposedly withdrawn their nomination.

Despite actively campaigning for Duterte Youth, Cardema had earlier ignored calls for him to leave his post.

The Comelec was still studying the “substantive issues” related to his substitution, according to its spokesperson, James Jimenez.

Jimenez noted though that a ruling on Cardema and other groups which made a similar plea was expected to come out before winners of the party list race were proclaimed on Tuesday.

On Monday, partial and official Comelec results showed that Duterte Youth had yet to breach the minimum 2 percent threshold of all votes cast for party list groups, with 347,000 votes. The group is expected to land a House seat and is currently in 21st place.

After House seats are allocated to those groups that garnered 2 percent or more of all votes cast, the Comelec then apportions what is left of the 61 seats allocated for party list groups to the top vote getters.

Election lawyer Romulo Macalintal has warned that by giving way to Cardema, the five nominees of Duterte Youth exposed themselves to the possibility of being imprisoned or fined for violating Article 234 of the Revised Penal Code.

Under this provision, anyone elected into office who refused without legal motive to be sworn in or to discharge his duties may be imprisoned for up to six years or made to pay a fine of P1,000, said Macalintal, a losing senatorial candidate of the opposition Otso Diretso.

“This means that the Duterte Youth nominees who are probable winners in the last polls should first take their oath and assume office as representatives. Thereafter, if they still desire, they may resign but their replacements should follow the line of succession as [specified] in its list of nominees in their manifestation to participate in the party list system,” he said.

Election watchdog Kontra Daya and five youth groups said Duterte Youth’s “fake” nominees made a mockery of the elections and subverted the Comelec’s rules and other election laws.

It was also “a clear circumvention” of the poll body’s rule on appointive government officials to resign from their post, the groups said.

They pointed out that because of Cardema’s 11th-hour submission, Comelec’s requirement under Resolution No. 9366 to have the substitution published in newspapers was not met.
‘Bogus’ group

Kabataan party list group, which has represented the youth in the House since 2007, called Duterte Youth a “bogus” group with “no real constituency.”

Its representative, Sarah Elago, has attributed its precarious position to fraud and attacks by the government, which, she said, peddled false allegations that the group is a communist front.

Kabataan and other progressive party list groups, except Bayan Muna, have seen steep declines in their share of the votes in the midterm elections compared with what these garnered in 2016. —WITH REPORTS FROM JULIE M. AURELIO AND MATTHEW REYSIO-CRUZ