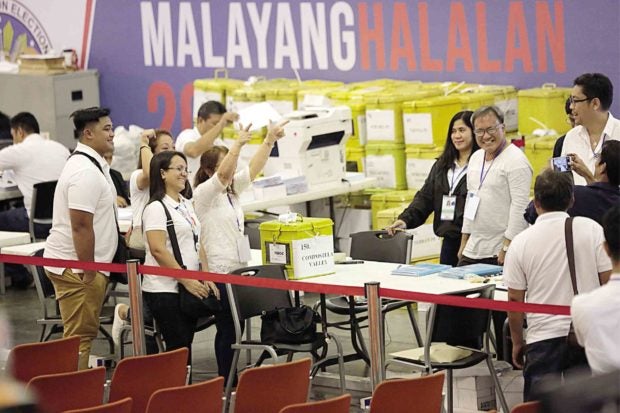 HAPPY RETURNS Teachers celebrate on Monday after handing over ballot boxes containing election returns from Compostela Valley and Davao City to the Commission on Elections sitting as the National Board of Canvassers at the PICC in Pasay City, exactly a week after the midterm elections. —GRIG C. MONTEGRANDE

MANILA, Philippines — The initial findings of the review by the Parish Pastoral Council for Responsible Voting (PPCRV) of the computer logs of the Commission on Elections (Comelec) appear to support the poll body’s explanation for the seven-hour delay in the transmission of election results on May 13.

But that doesn’t mean the Comelec is already off the hook, PPCRV chair Myla Villanueva told a news briefing on Monday. The PPCRV conducts an unofficial count of the vote.

The Comelec has blamed the delay on a “bottleneck” caused by an avalanche of data from the regions.

Villanueva, however, said the Comelec needed to explain why the bottleneck even occurred.

The May 13 midterm elections were the country’s fourth automated balloting. No bottlenecks happened in the previous elections.

In sum, the PPCRV review found that from 6:15 p.m. on May 13 to 1:19 a.m. on May 14, election results were continuously being transmitted to the Comelec transparency server; the data were complete; and there really was a bottleneck caused by the file transfer manager.

But the PPCRV was not satisfied with those findings.

How the data traveled

“The PPCRV will not stop,” Villanueva said. “We will continue to observe other aspects of the logs.”

She said the PPCRV had also asked the Comelec for the “transmission router logs” and the original copy of the central server logs.

The file transfer manager is the module that pushes the data onto the tally boards.

“The data was actually coming into the transparency server, it was not just being passed on to us,” Villanueva said.

“The PPCRV is not in a position to declare or conclude why the bottleneck happened, just that it did. We need to continuously ask [the] Comelec why it happened,” she said.

“What were their processes? What did they do to prepare this transparency server? What environment did they use? What resources are in that server and how big is it? What makes that file transfer manager tick and cause it to choke?” she asked.

Did the PPCRV detect fraud?

Villanueva was noncommittal: “We matched all we matched. Please draw your own conclusions from that.”

The transparency server is one of three servers that receive data from the VCMs in the polling precincts.

It is the server shared with the PPCRV, accredited citizen arms, political parties, and the press for their count of the vote.

The two other servers are the board of canvassers server, which is the source for the official count, and the Comelec central server, the source of the poll body’s public access website.

The Comelec conducts the official count.

On Monday, the Comelec was just awaiting the results from Isabela province and four overseas posts whose certificates of canvass had yet to be processed to proclaim the winners in the senatorial and party list races.

But because the results from Saudi Arabia and the United States had yet to be received on Monday night, the Comelec tentatively moved the proclamation of the Senate winners to Tuesday evening.

The proclamation of the winners of the party list race was tentatively set for Wednesday evening.

According to Frances Arabe, Comelec education and information department director, the secure digital (SD) cards to be used to transmit the results were still in transit to the overseas offices as of Monday night, meaning the votes from these areas would have to be processed by the Comelec on Tuesday morning.

The close to 1.7 million votes from Isabela, Japan, Saudi Arabia, Nigeria and the United States would be enough to reconfigure the last three spots in the senatorial race.

Special elections were held in Jones, Isabela, on Monday to allow the residents to vote, as they were unable to cast ballots on May 13 after armed men seized and burned two VCMs.

Michael Camangeg, provincial election supervisor and canvassing board chair, said the voters returned to the polling precincts at Barangay Dicamay I for the special balloting amid tight security.

Prior to the transmission of votes from the five areas, reelectionist Sen. Aquilino Pimentel III was locked in 10th place in the Comelec’s partial and official tally with 14,295,957 votes.

Either of reelectionist Senators JV Ejercito and Bam Aquino had a statistical chance of grabbing the last Senate seat from fellow reelectionist Sen. Nancy Binay as her biggest lead stood only at less than 170,000. —With reports from Jovic Yee and Villamor Visaya Jr.