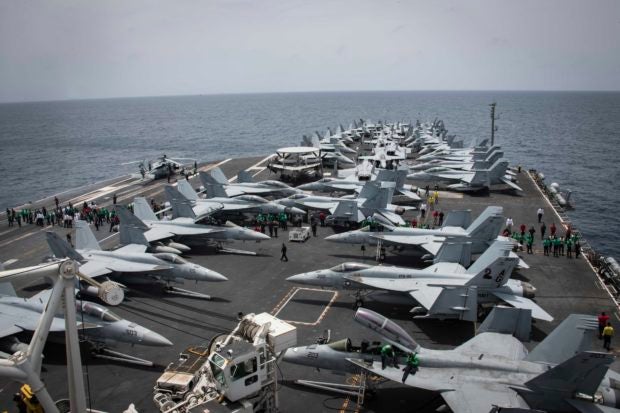 In this Sunday, May 19, 2019, photo released by the U.S. Navy, sailors partake in a foreign object and debris walk-down on the flight deck of the Nimitz-class aircraft carrier USS Abraham Lincoln in the Arabian Sea. (Mass Communication Specialist 3rd Class Garrett LaBarge/U.S. Navy via AP)

BAGHDAD — Leading Iraqi Shiite figures warned Monday against attempts to pull their country into a war between the United States and Iran, saying it would turn Iraq into a battlefield yet again, just as it is on the path to recovery.

The warning came hours after a rocket slammed into Baghdad’s heavily fortified Green Zone, landing less than a mile from the sprawling U.S. Embassy. No injuries were reported and no group immediately claimed the Sunday night attack.

Shortly after, President Donald Trump tweeted a warning to Iran not to threaten the United States or it will face its “official end.”

Last week, the U.S. ordered the evacuation of nonessential diplomatic staff from Iraq amid unspecified threats from Iran and rising tensions across the region. The White House has also sent warships and bombers to the Persian Gulf to counter the alleged Iranian threats.

On Monday, two influential Shiite clerics and a leading politician – all with close ties to Iran – warned that Iraq could once again get caught in the middle. The country hosts more than 5,000 U.S. troops, and is home to powerful Iranian-backed militias, some of whom want those U.S. forces to leave.

Populist Shiite cleric Moqtada al-Sadr said any political party that would drag Iraq in a U.S.-Iran war “would be the enemy of the Iraqi people.”

“This war would mark the end of Iraq,” the black-turbaned al-Sadr warned. “We need peace and reconstruction.”

Qais al-Khazali, the leader the Iranian-backed Asaib Ahl al-Haq, or League of the Righteous group, tweeted that he is opposed to operations that “give pretexts for war” and added they would only “harm Iraq’s political, economic and security conditions.”

For the Shiite-majority Iraq to be a theater for proxy wars is not new. It lies on the fault line between Shiite Iran and the mostly Sunni Arab world, led by powerhouse Saudi Arabia, and has long been the setting where Saudi-Iran rivalry for regional supremacy played out.

After America’s 2003 invasion of Iraq to oust dictator Saddam Hussein, American troops and Iranian-backed militiamen fought pitched battles around the country, and scores of U.S. troops were killed or wounded by sophisticated Iranian-made weapons.

The office of Hadi al-Amiri, the leader of a coalition of Shiite paramilitary forces backed by both Baghdad and Tehran, released a statement calling on Iraqis to work together “to keep Iraq and the region away from war.”

“If war breaks out … it will burn everyone,” al-Amiri warned. /kga