Girl, 5, killed; her body stuffed inside a bag in Laguna 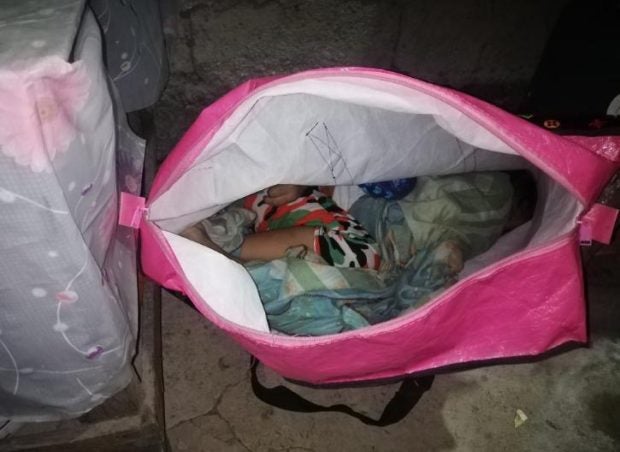 The body of the 5-year-old girl stuffed inside a pink bag, where the 30-year-old suspect Glenn Ford Manzanero allegedly kept her after allegedly killing her in Laguna province. Photo from Laguna PNP

SAN PEDRO CITY — Police on Monday filed charges against the suspect in the killing of a five-year-old girl in Sta. Cruz, Laguna.

Manzanero was charged with the murder of the child, who was reported missing by her family in Barangay Patimbao on Sunday.

He said there were witnesses who testified seeing her leave with Manzanero.

“The suspect lured the victim with a mais-con-yelo (a dessert). She knew him because they were neighbors,” Agbuya said.

The police began its search after the child’s mother, a house help, reported that her daughter has been missing.

Agbuya said it was already 9 p.m. when Manzanero’s relative reported the dead child found in their kitchen. The victim, he said, sustained cuts in the neck from a blunt knife and was stabbed with an ice pick.

He also said the girl’s body was placed inside a large pink bag made from recycled rice sack.

“The relative of (Manzanero) asked him, ‘What’s inside the bag?’ And the suspect said, ‘There’s a girl inside,’” Agbuya said.

Police arrested Manzanero who admitted to the crime, Agbuya said. Manzanero also told police he was “high on drugs” when he took the girl, the Sta. Cruz police chief added.

Police said they are still waiting for the autopsy results to find out if the child was sexually assaulted. /kga