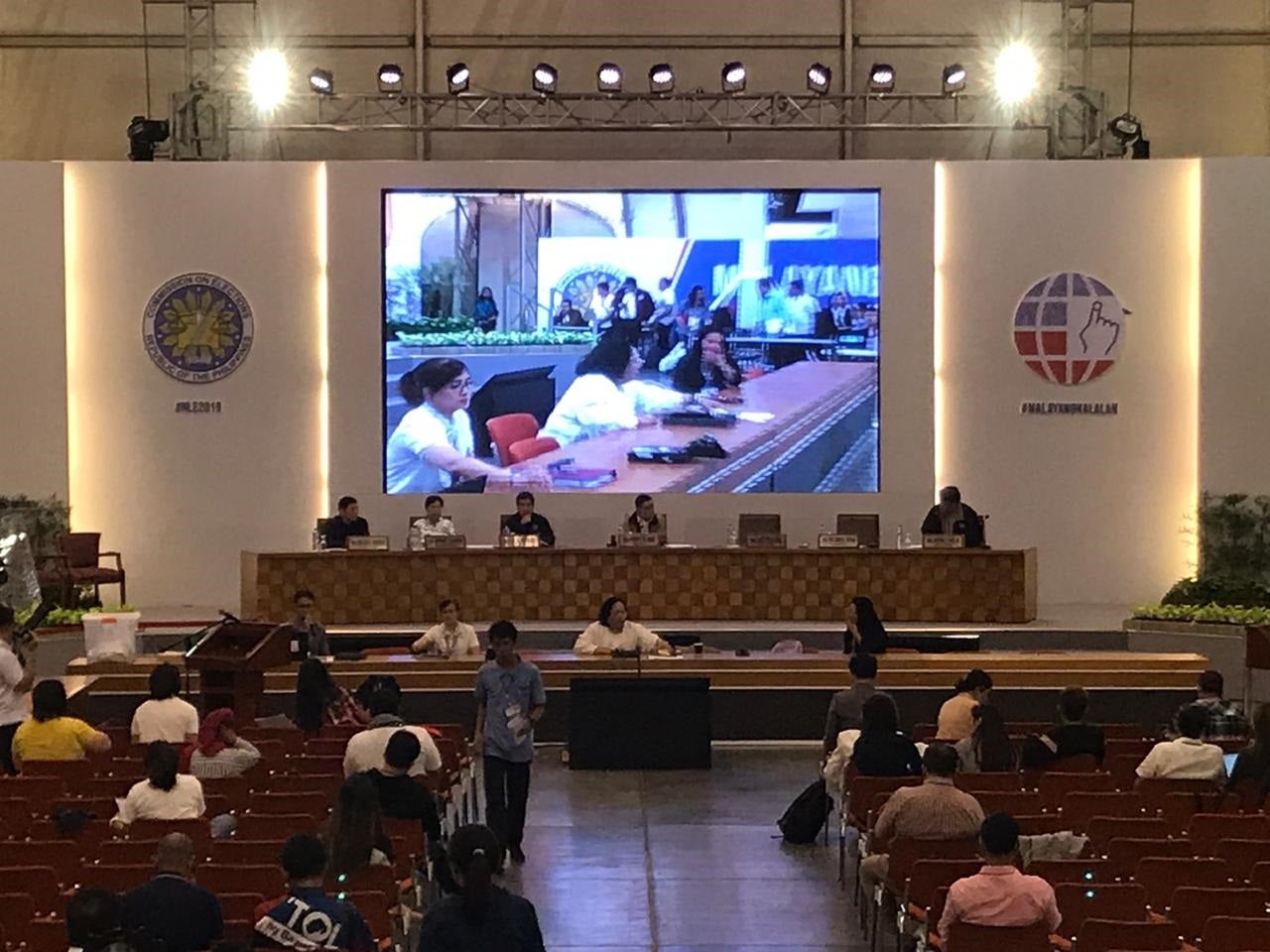 Members of the National Board of Canvassers resumes the canvass of votes from last week’s midterm elections. INQUIRER.NET / DAPHNE GALVEZ

MANILA, Philippines — The Commission on Elections, sitting as National Board of Canvassers (NBOC), resumed its session on Monday, but quickly suspended it after no new transmissions of certificates of canvass (COCs) were received as of 1:49 p.m.

With the absence of any transmission, the NBOC will convene again later at 7:00 p.m., at the Philippine International Convention Center.

The Comelec is set to process the five remaining COCs from last week’s midterm elections.

As of Sunday, 162 COCs from across the country and precincts abroad had already been canvassed. Those accounted for 97 percent of the total of 167 COCs.

The Comelec said the five remaining COCs would come from Japan, Saudi Arabia, Nigeria, Washington, DC, in the United States, and the province of Isabela.

So far, reelectionist Senators Cynthia Villar and Grace Poe maintained their leads in the senatorial race, garnering 24,757,642 votes and 21,563,558 votes, respectively, in the partial, official tally of votes.

Most of those who entered the so-called Magic 12 were administration-backed candidates, while none of the opposition hopefuls made it to the winning circle.

Below are the latest partial and official results from the Comelec’s canvassing:

According to the latest and unofficial tally from the Parish Pastoral Council for Responsible Voting (PPCRV)-Inquirer transparency server, the ACT-CIS will so far have three seats in the House of Representatives, while Bayan Muna and Ako-Bicol will have two seats and one seat, respectively.

Also included in the Top 10 of the Comelec’s partial and official tally were:

There are 181 party-list groups running for 61 seats in the midterm polls.

A group earns a seat at the House of Representatives if it gets at least two percent of the total party-list votes. If a party-list group gets more than two percent, it may get more seats up to a maximum of three, depending on percentages based on the total vote.

Should groups getting two percent of the party-list votes fail to occupy the available 61 seats, the remaining seats would be allocated to other groups according to their ranking. Each group will be given one seat each until all the seats are filled.

The Comelec earlier said the proclamation of winning senators and party-list representatives might take place on Tuesday or Wednesday. No proclamation would be done on Monday as COCs have yet to be canvassed.

The poll body also dismissed calls to partially proclaim first the top 6 winning senators, saying it would prefer to have a full or “100 percent proclamation.” (Editor: Cenon B. Bibe, Jr., Julie Espinosa)