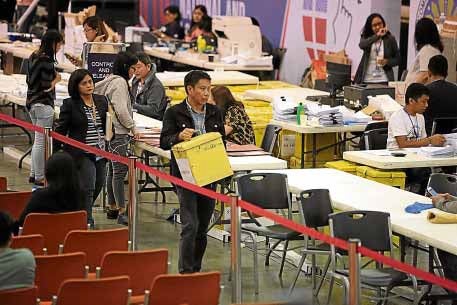 MANILA, Philippines — Officials of the Commission on Elections (Comelec) who failed to protect the integrity of last Monday’s midterm elections should be held accountable, Sen. Aquilino Pimentel III said on Sunday.

Pimentel, chair of the Senate committee on electoral reforms and people’s participation, pointed out that the May 13 balloting was already the fourth national elections that used the automated voting system of Smartmatic, the Comelec’s preferred technology provider.

He said Comelec officials should explain at a hearing set by the joint congressional oversight committee for June 4 why, after four automated elections, various technical problems still marred the balloting on May 13.

There should be consequences

“We will ask the Comelec all the complaints that we have been hearing. This is supposed to be the fourth time that they used this (voting) system. They should be adept [at] it [by] now,” Pimentel said in a radio interview.

“We will listen to their explanation. But if there are grave violations and grave incompetence, there should be consequences for them,” he said.

The reelectionist senator, who was poised to secure his second term based on the latest partial and official vote count, said Comelec officials should be able to determine if the problems encountered on election day changed the outcome of the voting.

“The first thing we will ask is if there [was] fraud and [whether the] glitches . . . affected the results of the elections. We spent P10 billion for the voting machines because we want[ed] the elections to be worry-free and the results [would] be faster,” he said.

“We will also ask if these problems could have been avoided by anticipation. Why was there a seven-hour delay in the transmission of votes (to the Comelec transparency server)? They told us before that they have already tested the software,” Pimentel added.

On Saturday, the Comelec stood by the accuracy of the vote-counting machines (VCMs) used in the midterm elections as shown by the independent audit conducted by the Parish Pastoral Council for Responsible Voting (PPCRV).

Election Commissioner Rowena Guanzon insisted that cheating could not be done with the use of the VCMs “unless you preshade the ballots.”

Interestingly, the Kabataan party list had shared a video purportedly showing a group of women in Lanao del Sur province preshading the ovals on hundreds of ballots.

The PPCRV is reporting on Monday the results of its review of the Comelec transparency server’s electronic logs.

The logs explain the computer’s activities and could show if there were irregularities during the seven-hour interruption of the transmission of election results on Monday night.

Guanzon, who visited the PPCRV command center in Manila on Sunday, said the group’s IT experts went through the logs to find out “if something went wrong, maliciously or innocently, with out transparency server.”

The election watchdog had so far observed that the data matched with officials results, except for “minor discrepancies” in only two election returns.

The results of the senatorial election remained unchanged on Sunday from the previous day.

A week after the balloting, the Comelec canvassing of votes stood at 96.41 percent on Sunday, with the poll body blaming the delay on defective secure digital (SD) cards used in the overseas voting.

Frances Arabe, assistant director at the Comelec’s education and information department, on Sunday said the results of the overseas vote in Japan, Saudi Arabia, Nigeria and the United States had yet to be received because the SD cards used malfunctioned, preventing the transmission of the results at the close of the balloting on Monday.

“The SD cards are corrupted and the replacements have to come from our Santa Rosa (Laguna) hub. That is why it took time because we have to ship the replacement SD cards,” Arabe said.

She said the Comelec expected to receive the results of the overseas vote by Monday.

Apart from the overseas vote, still to be canvassed are the votes in Isabela province, as the municipality of Jones is holding special elections on Monday.

In total, 2.23 million votes have yet to be canvassed by the Comelec and these include the votes in Zamboanga del Sur province.

Arabe said the earliest the Comelec could proclaim the winners was Tuesday.

But already sure of winning, former Philippine National Police chief Ronald dela Rosa on Sunday urged the Comelec to proclaim half of the winners of the senatorial election, as the votes that remained uncanvassed were “very minimal.”

Arabe said the Comelec wasn’t shutting the door to a partial proclamation, but the matter had yet to be discussed by the commission. —Reports from Marlon Ramos, Dona Z. Pazzibugan and Jovic Yee

Read Next
Palace quells talk anew of sick Duterte
EDITORS' PICK
Water remains our saving grace right now
Digital hunt for Hyun Bin: 5 challenges for Smartees
Motostrada expands by handing over ‘Trident’ and adding new ‘Horseman’ to its growing business
WHO: Indoor airborne spread of coronavirus possible
No arrests to be made on 1st day of allowed pillion riding for couples — HPG
House panel set to meet for possible decision on ABS-CBN franchise bid
MOST READ
‘I will always speak up for you’: Server on defending Fil-Am family from racist rant
‘Nouveau’: Agot Isidro hits Jinkee Pacquaio’s show of luxury Hermes, Louis Vuitton bikes
Bela Padilla on being tagged a Diehard Duterte Supporter: ‘Nope, not at all’
Solon withdraws support for ABS-CBN franchise renewal
Don't miss out on the latest news and information.