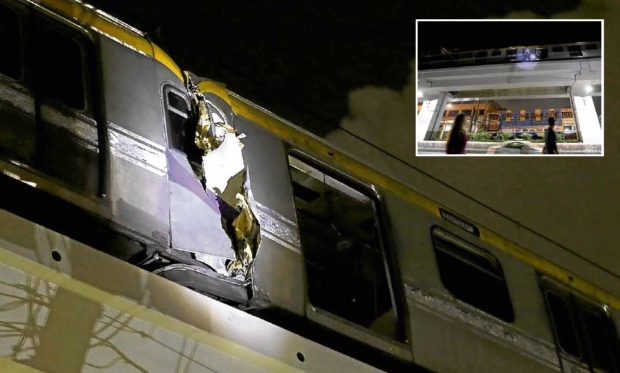 RUNAWAY The runaway train from Anonas Station smashed into another train running eastward on the LRT 2 tracks in Quezon City on Saturday night, injuring 34 people. Passersby (inset) look at the two trains, wondering how the accident happened. The LRTA and the Department of Transportation assured the public it was an “isolated incident.” —RICHARD A. REYES

MANILA, Philippines — The Light Rail Transit Authority (LRTA) has ordered an investigation to determine how a parked train moved on its own and crashed into another train on the tracks between the Cubao and Anonas stations in Quezon City on Saturday night, injuring 34 people.

LRTA administrator Reynaldo Berroya on Sunday sought to ease public fears about safety on Light Rail Transit Line 2, calling the crash an “isolated case” that never happened in the 16 years that the line had been operating.

The LRTA and the Department of Transportation (DOTr) also issued a statement, maintaining that “LRT 2 is a safe mode of public transportation, and that [Saturday’s] collision was an isolated incident.”

Operations on the full LRT 2 route were restored at 12:13 p.m. on Sunday, but with only five trains running — a combined maximum capacity of 8,140 passengers.

An estimated 240,000 people commute on the elevated railway every day.

The morning after the crash, five of the injured were still confined at World Citi Medical Center and Quirino Memorial Medical Center.

Hernando Cabrera, spokesperson for the LRTA, said one of the five had a dislocated shoulder, while another suffered a sprained arm.

The LRTA and the DOTr promised to shoulder the full cost of the hospitalization and follow-up examination of the injured, as well as reimburse them for lost income.

Transportation Secretary Arthur Tugade also requested free food and transport for those who were hurt as they headed home.

According to Assistant Transportation Secretary Goddes Libiran, the collision occurred at 9:51 p.m. on Saturday after a train that had been parked on a “pocket track” near Anonas Station moved on its own and headed toward Cubao on the railway’s eastbound tracks.

A train full of commuters that was moving from Cubao to Anonas Station on the same tracks was warned by the control center about the oncoming train and managed to make a full stop before the runaway slammed into it.

“The pocket track is a portion [that] is at the side or center near or inside a station, and has access to either the eastbound or westbound tracks of the railway line,” Libiran said. “The portion where [the runaway train] was parked had a slight incline.”

A fact-finding committee was expected to find out how the train moved downward from there and got to the eastbound tracks.

It had been parked on the pocket track since 2 p.m. on Saturday to be checked for unspecified defects.

At least one LRT 2 employee was on the “dead” train when it began to move, Cabrera said.

Ahya Lopez, one of the passengers on the eastbound train, told reporters that the passengers waited on the train for at least 30 minutes after the crash before being assisted out by LRT 2 personnel.

“We were stuck inside for a long time,” she said. “No one was telling us what was happening. We were so nervous.”

The passengers were tossed around the coaches due to the impact of the crash, some of them slamming into the sides, Lopez said.

Cherry Ann Ignacio, another passenger, said that after the eastbound train stopped, the passengers were told to hold on to something and brace for impact.

When the runaway train slammed into their train, they thought there had been an explosion, she said.

The lights also blinked out, leaving passengers to tend to their injuries in the dark, she said.

Cabrera said the fact-finding committee was expected to submit its report within 48 hours, meaning initial findings could be announced by Monday or Tuesday.

The committee was also tasked with making recommendations “to prevent the recurrence of the same incident in the future” and assessing the agency’s response to the collision, according to an LRTA statement.

With the damaged trains hauled to the LRT 2 depot at Santolan Station for repairs, there will be fewer trains running on the line for the time being.

The reduction will surely be felt on Monday, when workers who commute on LRT 2 appear at the stations, Cabrera said.