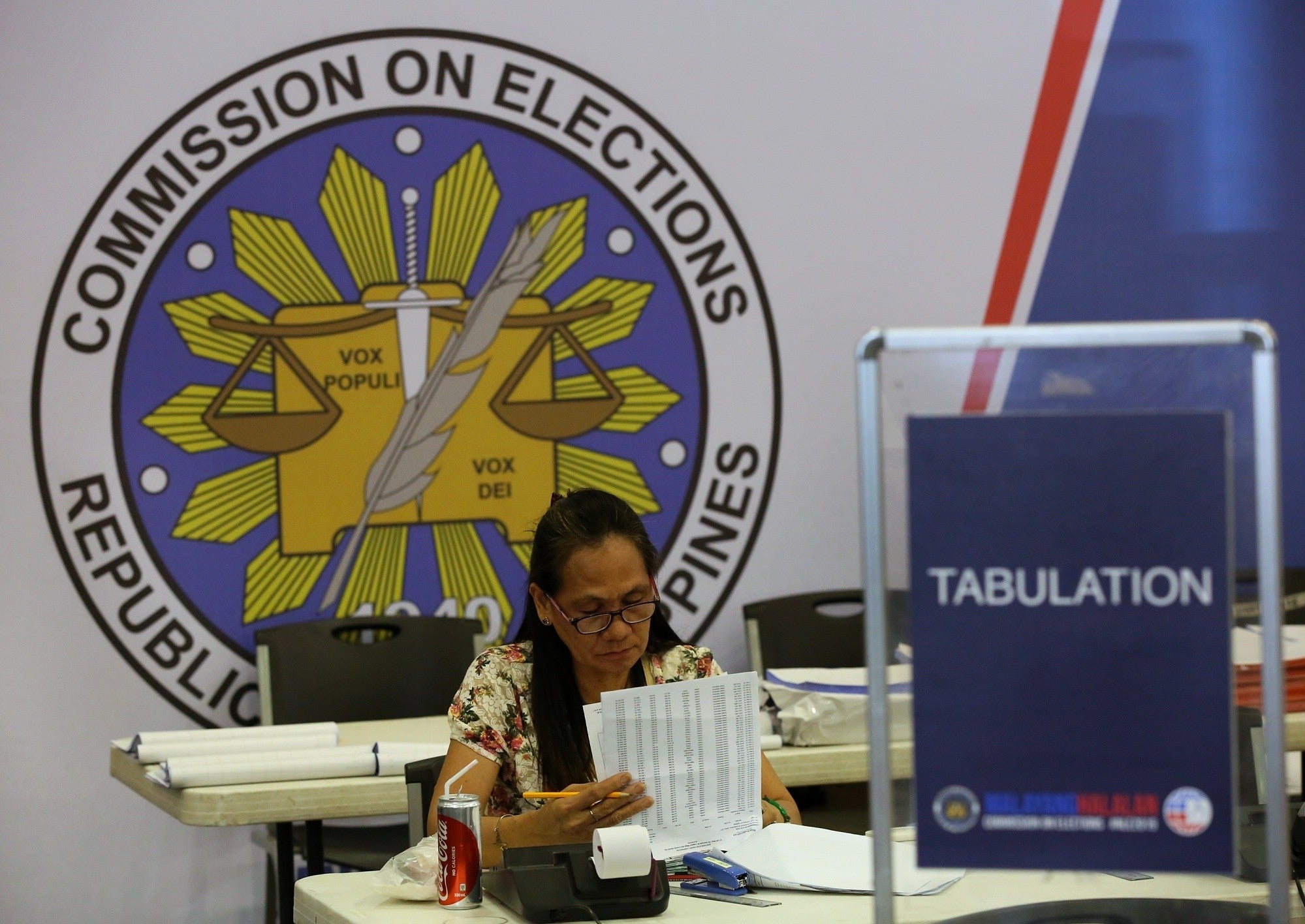 HAND ON DECK A Commission on Elections staff member on Thursday sifts through election documents in her corner at the Philippine International Convention Center in Pasay City. Days after the May 13 mid-term elections, the poll body is still being asked to deal with complaints about allegedly pre-shaded ballots and malfunctioning vote  counting machines. —LYN RILLON

BACOLOD CITY, NEGROS OCCIDENTAL, Philippines — The Commission on Elections (Comelec) on Saturday vouched for the accuracy of the vote-counting machines (VCMs) used in Monday’s midterm elections and said the results of the independent audit of the Parish Pastoral Council for Responsible Voting (PPCRV) would bear the poll body out.

Early results of the review of the electronic logs of vote transmission showed “nothing unusual” that would support allegations of manipulation of results, the PPCRV, a church-based election watchdog, said on Saturday.

PPCRV chair Myla Villanueva said data from the Comelec’s transmission server had not showed any signs that vote transmissions were tampered with, even during the seven-hour interruption in the release of early poll results on Monday night.

“So far our team of experts have not seen anything that is a cause for concern. What we have seen is that data from the [VCMs] continued to come in even during those seven hours that we were clueless as to what was going on,” Villanueva told reporters.

Election Commissioner Rowena Guanzon advised losing candidates who cast doubts on the results of the elections, particularly those questioning the glitches in the VCMs and secure data (SD) cards, to file a complaint with the Comelec.

“You can’t cheat using the [vote-counting] machines unless you preshade the ballots,” she said.

“If [candidates] lost and do not believe the results they can always file a protest. They have to lodge a protest, so we can look into the merits of their case,” she added.

Guanzon pointed out that in the PPCRV’s independent audit, the election returns (ERs) matched the hard copies, indicating she said that the machines were accurate.

As of 5:20 p.m. on Saturday, reelectionist Sen. Cynthia Villar continued to lead the senatorial race, based on the PPCRV’s unofficial count.

The Comelec, sitting as the National Board of Canvassers (NBOC), said it had processed 154 of the 167 certificates of canvass (CoCs) as of 6 p.m. on Saturday at the Philippine International Convention Center (PICC).

Not ready for proclamation

The poll body said its still-unfinished canvass of all CoCs forced the deferment of Sunday’s scheduled proclamation of winners in the senatorial and party list elections.

“We are not ready to proclaim yet. The schedule … [depends on our ability] … to finish [canvassing] CoCs tomorrow (Sunday) … as we want to proclaim immediately after completion of canvassing,” said Frances Arabe, director of the Comelec’s Education and Information Department, at a press briefing.

Arabe said even if canvassing were finished on Sunday, they would still need to set up the proclamation area for the “sure winners” among the senatorial candidates.

She said the Comelec had already notified the sure winners and would update them on the exact date and time of the proclamation.

Technical glitches and the seven-hour delay in transmitting voting data to the Comelec transparency and media servers had triggered a torrent of protests from various groups which questioned the integrity of Monday’s elections.

On Wednesday, Election Commissioner Marlon Casquejo said the unofficial count was delayed after the application for pushing out the results from the Comelec transparency server to third-party organizations suffered a glitch shortly after the voting ended at 6 p.m. on Monday.

Casquejo said the delay was a case of “bottleneck” after the system got overwhelmed by the deluge of transmitted results.

On Friday, the PPCRV’s team of IT experts began sifting through volumes of activity logs, with special attention to the seven-hour period on Monday evening when its tally board stopped receiving data beamed from VCMs across the country.

According to William Emmanuel Yu, a PPCRV board member and IT expert, early results of the transparency server log’s audit showed normal activity even after the broadcasting of data stalled around 6:14 p.m. on Monday.

He showed reporters a graph comparing the rate of data transmission from the close of voting on Monday to those of the past three automated elections in 2010, 2013 and 2016. He said it followed the usual curve.

Yu said this could indicate that, contrary to the fears of some sectors, data continued to be transmitted to the transparency server during the seven-hour blackout.

He supported earlier statements by the Comelec’s IT experts who said that the problem was caused by a “Java error,” which refers to a programming language used.

“That, for us, is the most feasible, although that is too generic; Comelec has to provide more details,” Yu said.

The National Citizens’ Movement for Free Elections (Namfrel) has challenged the Comelec to addresss “transparency issues” that it said marred the country’s fourth automated elections.

At a press briefing on Saturday, Namfrel urged the poll body to disclose the location of its central server data and asked why it could not provide public access to open election data—or “data hidden in the machines that could reveal election-related irregularities (or the lack thereof).”

“Security by obscurity has no place in our elections. We should understand how our votes are being counted,” said Namfrel chair Gus Lagman.

Lagman said “transparency is lost” in automated counting. He suggested manual counting at the precinct level that will then go through automated transmission.

“The VCMs are three years old, will we still use it in 2022? We have a very short election cycle and there are a lot of issues [with the current system],” said Lito Averia, national council member of Namfrel.

Tindig Pilipinas coalition on Friday called on the poll body to explain what it said were numerous irregularities that raised “questions on the integrity” of the elections.

“We call for complete accountability of the Comelec. We demand that a thorough investigation of all these anomalies be conducted. We insist that we be given irrefutable proof that our votes were properly counted,” Jozy Acosta-Nisperos, of The Silent Majority said, in a statement.