Philippine Navy displays assets to public ahead of anniversary 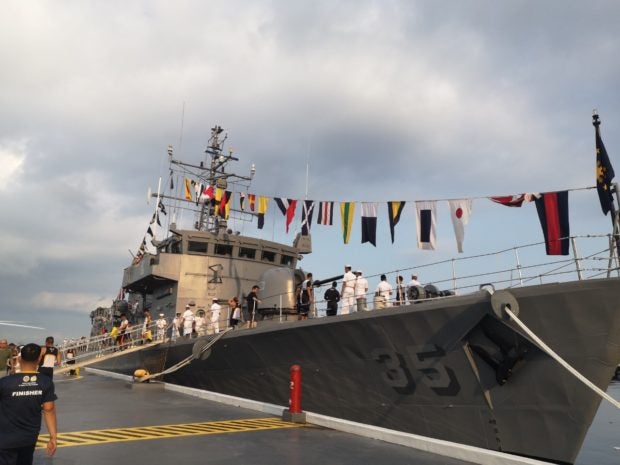 The BRP Emilio Jacinto of the Philippine Navy on display at the dock of the Navy headquarters in Manila. INQUIRER.net photo / Frances G. Mangosing

MANILA, Philippines — The Philippine Navy displayed some of its assets to the public on Saturday ahead of its upcoming founding anniversary later this month.

The Navy headquarters on Roxas Blvd. allowed visitors to check out naval assets on static display during the sidelines of the Run for the Navy, a run for a cause intended to cater welfare programs for navy heroes and their families.

Some of the assets showcased were the AW-109 helicopter, V150 armored vehicle of the Philippine Marines, search and rescue equipment and the weapons of the naval special operations group.

The patrol vessel had been out of action since 2018 due to ongoing upgrades but it appears that it may return to sea soon.

A senior Navy official privy to the project said the ship is currently undergoing sea acceptance tests of the upgrades and repairs, but didn’t go into details.

“Once there are satisfactory results based on the contract, then the ship will be declared operationally ready,” the officer said.

The Jacinto-class vessels are among the most modern ships of the Philippine Navy. It previously served the Royal Navy’s Hong Kong Squadron before they were acquired by the Philippines in 1997.

The Navy will mark its 121st year on May 27. Its newest acquisition, brand new anti-submarine helicopters from United Kingdom, is expected to take centerstage during the celebration. (Editor: Jonathan P. Vicente)

ADVERTISEMENT
Read Next
Labor leader seeks suspension of vote canvassing over ‘technical glitches’
LATEST STORIES
After winning title, time for LA Tenorio to give back to Batangas folk
‘Mia’: Rom-com with a cause a career-boosting showcase for Coleen Garcia
No.13 lucky for Orlando Bloom
The ties that bind: Why the guys of Black Eyed Peas prefer to stay together
How Yam handles flirtatious guys
MOST READ
Nadine Lustre’s phone stolen in Brazil
Will you be the first P16 Billion Powerball jackpot winner from the Philippines?
Gretchen Barretto’s daughter Dominique graduates magna cum laude from California college
Ginebra beats Meralco again to capture PBA Governors’ Cup title
Don't miss out on the latest news and information.