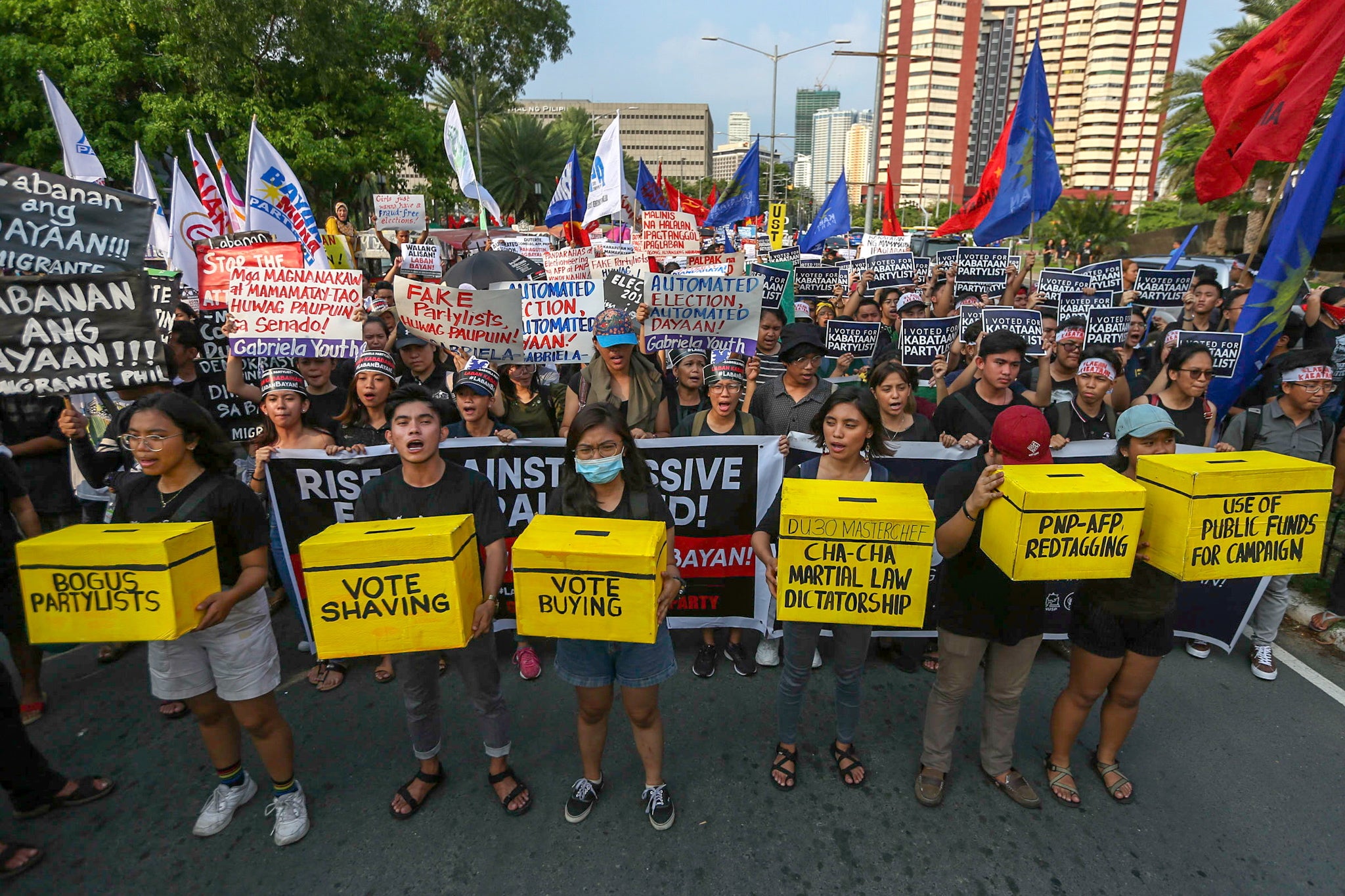 VOTING WITH THEIR FEET Decrying the technical glitches and alleged anomalies which they said undermined the credibility of the May 13 midterm polls, youth organizations march from various points in Metro Manila and converge for a rally on Friday near the Philippine International Convention Center, venue of the official canvass of votes in the senatorial and party list elections. —RICHARD REYES

Civil society and youth groups on Friday joined forces with opposition candidates and allies of the former Aquino administration in protest rallies to denounce what they described as one of country’s dirtiest elections ever.

In protest rallies dubbed “#Anyare Comelec” (What happened, Comelec?) at Mendiola in Manila and in front of the Philippine International Convention Center (PICC) in Pasay City, the groups called on the Commission on Elections (Comelec) to explain the issues that cast doubts on the integrity of the polls.

Akbayan also urged the Comelec to conduct a special random manual audit (RMA) of the party list election to erase any doubts on the credibility of the results.

Senatorial candidates Erin Tañada of the Otso Diretso coalition and Neri Colmenares and Leody de Guzman of the Makabayan bloc lashed out at state security forces and President Duterte for what they said were serious electoral offenses before and during the May 13 elections.

The Black Friday protest in front of the PICC, where the national canvass of the results of the midterm elections is being held, was organized by election watchdog Kontra Daya.

In his speech, Colmenares said that even before the elections, Duterte used his office and public resources to promote his favored candidates and vilify the opposition.

The police and the military violated their mandate to be nonpartisan by Red-tagging opposition candidates, he said.

Colmenares also criticized the technical glitches in the VCMs and the seven-hour blackout in the transmission of results on Election Day.

“The essence of automation is speed and transparency, which [were] missing on the most important day,” he said.

“If these were fair and honest elections, it would be okay to lose. But to use public office to control elections? That is not fair,” Colmenares added.

In his four-page motion, Sen. Francis Pangilinan, president of the opposition LP, also asked the Comelec to disclose records of locations where secure digital (SD) cards failed and to explain what had happened to the transparency server.

An SD card stores the encrypted image of ballots fed into counting machines.

The LP urged the Comelec to create an “independent body” to investigate the seven-hour data outage of the transparency server.

In a letter addressed to Comelec Commissioner Luie Tito Guia, Etta Rosales, chair emeritus of Akbayan, said a special RMA for party list groups was needed due to the technical glitches that marred the elections.

Rosales alleged that there were “widespread instances of discrepancy between the votes in the ballot and the result reflected in the voter verifiable paper audit trail.”

She also complained about the “disenfranchisement of voters brought about by the malfunction of VCMs and SD cards.”

On Wednesday, the Comelec and poll watchdog Legal Network for Truthful Elections began the RMA, which aims to check the accuracy of the VCMs.

Teachers who sit as RMA auditors verify if the votes on the ballot reflect the results in the electronic transmission and the election returns.

The current process verifies the results in the senatorial, congressional and mayoral races.

Based on the partial and unofficial results from the Comelec’s transparency server on Friday, Akbayan barely received 1 percent of the total votes cast as it got only 170,970 votes.

For a party list group to be assured of a seat in Congress, it must be able to secure at least 2 percent of the vote.

Sought for comment, James Jimenez, spokesperson for the Comelec, on Friday said that while Rosales’ request would be considered, he was uncertain when this would be granted.

“There are logistical concerns, so I am not sure when a response will be made or what the response will be. But that is definitely being considered, being studied right now,” Jimenez said.

Jeeploads of youths converged at Mendiola in Manila on Friday morning to call for an independent investigation of alleged election cheating across the country, especially in Mindanao, which they said favored candidates endorsed by the President.

Claiming they had received numerous accounts of possible poll fraud, the youth groups, which proceeded to the PICC after a brief program, called on the people to reject the election results.

“How could murderers and plunderers win?” Alex Danday, spokesperson for Anakbayan Youth, told the Inquirer.

Danday said the youth groups also received reports from voters who said their election receipts contained names of candidates and party lists though they did not vote for them.

She said the most damning evidence of poll fraud was the 46-second video uploaded on social media that supposedly showed the pre-shading of ballots in Lanao del Sur.

Malacañang on Thursday urged the Comelec to investigate reports that preshaded ballots were used in Monday’s elections in the province.

The Comelec said it was seeking outside help in investigating the video and urged the uploader to come forward and file a complaint with the poll body.

“We encourage whoever has information on the video to come forward and file a complaint,” Jimenez said in a tweet on Thursday.

In Marawi City, about 1,000 residents gathered on Friday in a prayer rally to condemn alleged fraud and vote-buying in the city and other parts of Lanao del Sur.

The protest rally was held a day after the video of alleged pre-shading of ballots was uploaded on social media.

The protesters called on the President to intervene and declare a failure of elections in the province, including Marawi City.

Lawyer Ramayan Basman, a losing Marawi mayoral candidate who ran under Partido Demokratiko Pilipino-Lakas ng Bayan, said they had witnesses, including watchers, who executed affidavits that they saw the vote manipulations at the barangay level.

“We have videos where the BEIs (Board of Election Inspectors) were themselves the ones pre-shading ballots,” Basman said.

Her camp also had videos of vote-buying, she said.

In one precinct, she said, a barangay chair was allowed to stay inside the polling precinct supposedly to represent two candidates. The man distributed color-coded coupons depending on who they voted for.

Basman lost to reelectionist Mayor Majul Gandamra, who was proclaimed winner on Wednesday.

Norodin Alonto Lucman, who was losing in the vice gubernatorial race for Lanao del Sur, accused the Adiong clan, his relatives, of masterminding the massive election fraud in the province.