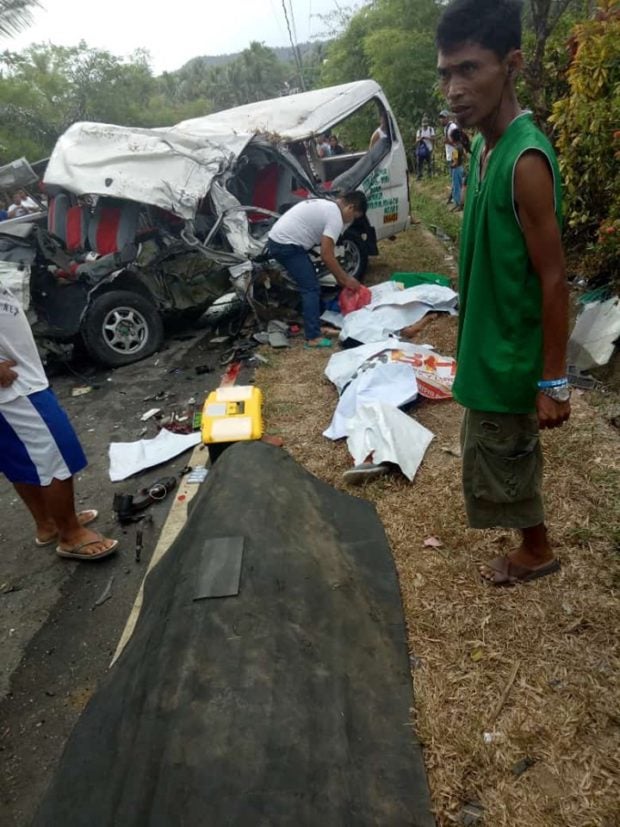 Eight passengers of a van-for-hire heading to Tacloban City were killed after a head-on collision with a six-wheeler truck in Babatngon, Leyte. CONTRIBUTED PHOTO

ORMOC CITY —- Eight passengers of a van-for-hire heading to Tacloban City were killed after a head-on collision with a six-wheeler truck at past 6 a.m. on Friday in Sitio Tab-ang, Barangay District 3 in Babatngon, Leyte.

Police Lt. Melvin Ayay, acting chief of the Babatngon Police Station, said the passenger van bearing Plate No. 084403 left the terminal in Babatngon past 5 a.m. and was on its way to Tacloban City when it met the accident.

He said that the six-wheeler truck, bearing Plate No. LEF 768, was heading to Babatngon town to deliver swine to a dealer at the Babatngon Public Market.

“The area where the collision happened is prone to accidents because the drivers from opposite directions could not see each other while traversing the highway,” Ayay said.

“I hope some of those brought to the hospital will survive because some of them were in critical condition,” he added.