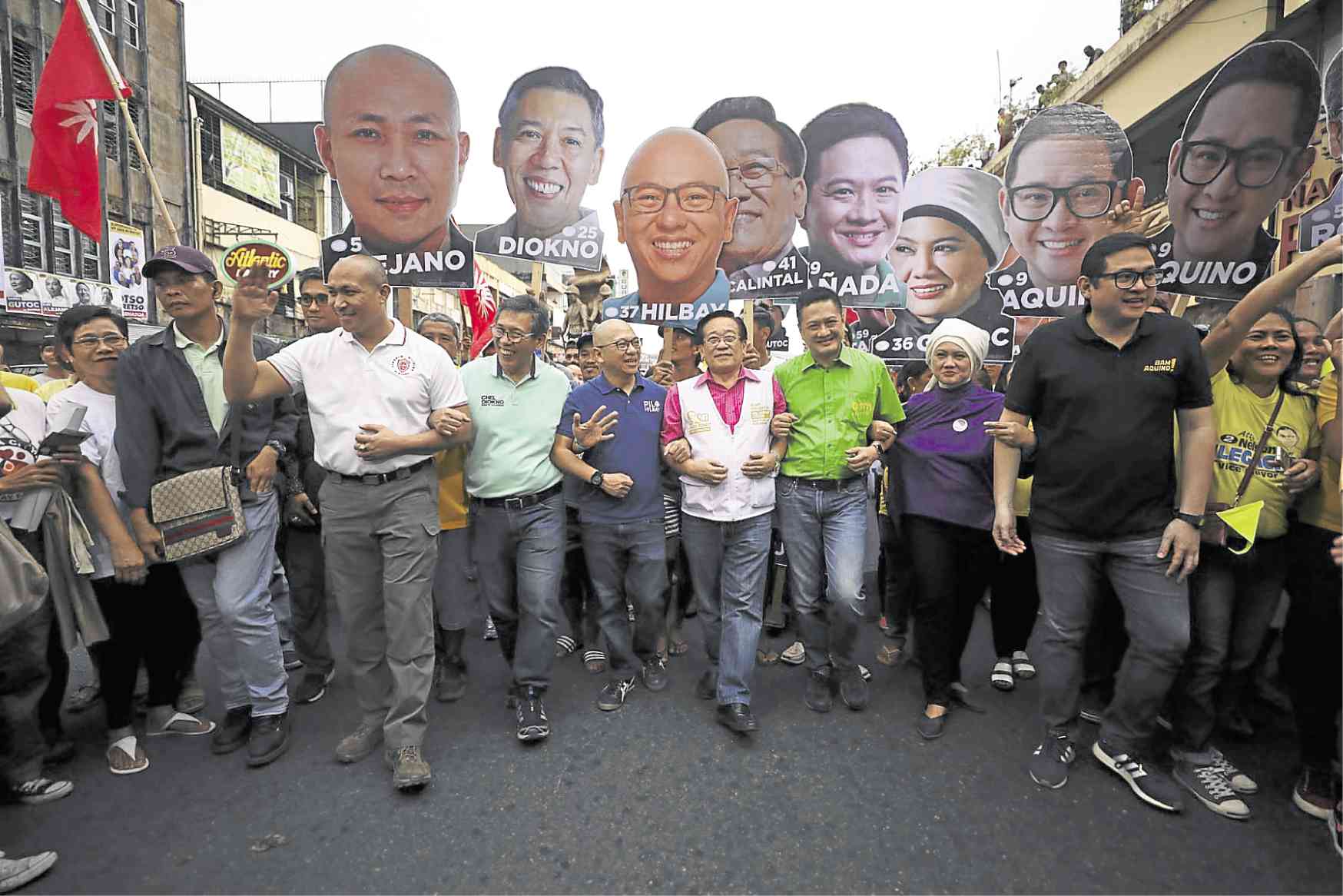 Of the eight opposition candidates who ran for the Senate, only Sen. Bam Aquino made it to the Top 12 spots in the cities of Malabon, Mandaluyong, San Juan, Marikina, Pasig, Muntinlupa, Parañaque, Las Piñas and the municipality of Pateros.

All eight candidates of Otso Diretso, on the other hand, were in the Magic 12 circle of the two most upscale and exclusive areas in the eastern part of Metro Manila, based on an analysis of election returns.

But Barangay Wack Wack Greenhills in Mandaluyong City and Barangay Greenhills in San Juan City accounted for a combined total of only 4,792 voters in Monday’s elections—1,657 in the former and 3,135 in the latter.

Except for these two barangays, all 26 and 20 other villages in Mandaluyong and San Juan, respectively, shut out the majority of the opposition.

In Marikina City, none of its 16 villages placed all eight Otso Diretso candidates in the Top 12.

The same was true in Pasig City, where none of its 30 barangays voted for all eight bets backed by the Liberal Party (LP)—Aquino, Gary Alejano, Chel Diokno, Samira Gutoc, Pilo Hilbay, Romy Macalintal, Mar Roxas and Erin Tañada.

Election returns showed that only Aquino managed to snag a spot in the Top 12 of eastern Metro’s four cities. His best showing was in Marikina, where he ranked 5th. He was 9th in Pasig, 11th in Mandaluyong and 12th in San Juan.

All the other seven opposition bets were shut out.

Wack Wack, an upscale enclave with a country club and 36-hole golf course, was the barangay most supportive of the opposition. Results showed that all of the eight top spots there were occupied by the Otso Diretso bets, with Aquino topping the race.

In Greenhills, the residents’ top two choices were Aquino and Diokno. Voters there backed only one HNP candidate as well—Sen. Cynthia Villar, who came in at 9th place. Poe, Ong and Serge Osmeña won in the posh subdivision, too.

Even though no barangay in Pasig City voted straight for Otso Diretso, two villages—San Antonio and Ugong—came close. Both backed six of the candidates, leaving out Alejano and Hilbay.

Both barangays are also predominantly composed of wealthy residents. Ugong is the location of the swanky Valle Verde communities and country club, while San Antonio is at the heart of the city’s central business district, Ortigas.

In four of the seven cities and municipality in southern Metro Manila, election results showed only Aquino in the Top 12. He was ranked 9th in both Muntinlupa and Parañaque, 11th in Pateros   and 12th in Las Piñas.

In Makati where he placed 13th, he needed only a little over 3,000 votes to wrest the last spot from JV Ejercito with 120,327 votes. It was, however, in this city that Aquino got the highest number of votes in the south at 117,288.

In Pasay and Taguig cities, he was in 14th place.

Even in Muntinlupa City, an endorsement from the incumbent mayor, Jaime Fresnedi, who is one of the two remaining Metro chief executives still with LP, the opposition still came up short.

Fresnedi was assured of a third term as mayor after he beat former Immigration Commissioner Red Mariñas—a nominee of the Duterte administration-backed National Unity Party.

At a campaign rally in Barangay Poblacion on March 5, Fresnedi rallied support for the opposition lineup.

“Why did I stay with the yellows? Because I believe they are fighting for the rights of people… We don’t need strongman leaders; we need leaders who will push programs for each of you. That’s what Otso Diretso will do when we support them,” he told the crowd.

While Aquino placed 9th in the city, the Top 12 spots were dominated by those backed either by President Duterte’s PDP-Laban or his daughter Sara’s HNP, or both.

Fresnedi himself even had a compromise. Despite being an LP member, his partymates were PDP-Laban nominees, including Vice Mayor-elect Temy Simundac and reelectionist Rep. Ruffy Biazon.

After Aquino, the next Otso Diretso bet was Diokno in 17th place with just 60,985 votes. Former Interior Secretary Mar Roxas was further down at 19th spot.

As members of the opposition, Otso Diretso candidates had a hard time convincing incumbent politicians to host their sorties. They even failed to campaign in Pasay City, the bailiwick of the Calixtos who were LP members during the Aquino administration. The family switched to PDP-Laban in 2016.

In Malabon City, the other Metro mayor still with the LP, Antolin “Len Len” Oreta, defeated Jeannie Sandoval who was personally endorsed by President Duterte.

However, Otso Diretso candidates did not receive the same support from city voters.

Data from Malabon City’s Commission on Elections showed that only Aquino, Oreta’s cousin, entered the Top 12 with 60,761 votes.

Completing the Top 12 were Francis Tolentino, Aquino and Koko Pimentel.

Former Bayan Muna Rep. Neri Colmenares, who is with the  opposition but  not with Otso Diretso, was in 21st place with 25,950 votes.

Three spots behind him was Alejano with 22,644 votes while Macalintal was two spots behind with 20,426 votes.

Malabon City was among the stops of Otso Diretso.