LONDON – British Prime Minister Theresa May was braced for an uncomfortable meeting Thursday with Conservative Party lawmakers who are demanding she quit within weeks.

Executive members of a committee that oversees party leadership contests were set to confront May with the threat of a leadership challenge if she does not step down over her failure to deliver Brexit. 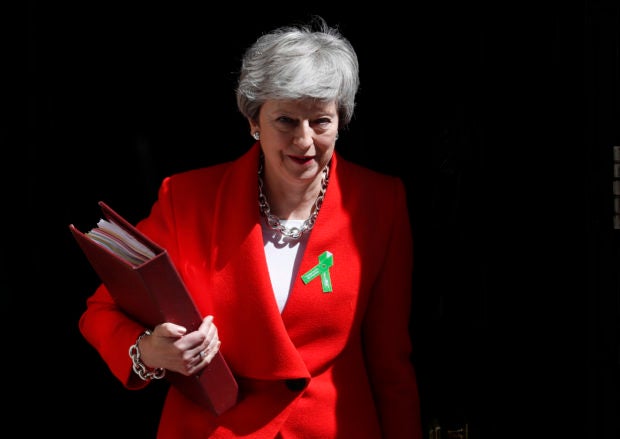 Britain’s Prime Minister Theresa May leaves 10 Downing Street for her weekly Prime Minister’s Questions in the House of Commons in London, Wednesday, May 15, 2019. (AP Photo/Alastair Grant)

Committee member Geoffrey Clifton-Brown said members wanted May to “set out a timetable to trigger a leadership contest.”

“It would be infinitely preferable if she set a date rather than us force her out,” he said.

May survived a no-confidence vote among party colleagues in December, and under Conservative rules she can’t face another challenge until a year has passed.

Some lawmakers want to change those rules to allow a new vote on May’s leadership as soon as June.

Pro-Brexit Conservatives are furious that Britain has not yet left the European Union, almost three years after voters backed Brexit in a referendum.

Many blame May for the impasse and want her replaced with a more staunchly pro-Brexit leader such as the former foreign secretary, Boris Johnson.

May points out that she struck a divorce deal with the EU, but it has been rejected by Parliament three times, even by many of the lawmakers who backed Brexit in the referendum.

May has said she will resign once a Brexit deal is approved and make way for a new leader to guide the U.K. through the next stage in the process, which will determine the country’s future relationship with the EU.

The prime minister plans to make a fourth attempt to get lawmakers’ backing for Brexit terms by putting a withdrawal agreement bill to a vote the week of June 3.

But it’s unclear how the government plans to persuade a majority of lawmakers to back May’s EU divorce terms, since few legislators on either side of the Brexit divide seem prepared to change their positions.

Weeks of talks between the government and the opposition Labour Party have failed to produce a compromise agreement.

“I’d have thought it was patently clear that if the prime minister’s deal is put for a fourth time, if it’s allowed, it will fail just as it has failed three times already,” Labour Brexit spokesman Keir Starmer said.

Britain is currently due to leave the EU on Oct. 31. /gg