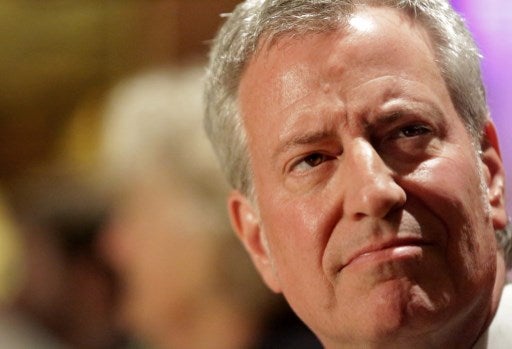 NEW YORK, United States — New York Mayor Bill de Blasio said Thursday he will seek the 2020 Democratic presidential nomination, despite a panning by US media and polls which suggest he faces a tough fight.

“Donald Trump must be stopped. I am Bill de Blasio and I am running for president because it’s time we put the working people first,” he said in a video announcing his candidacy.

De Blasio, 58, who first ran as an unapologetic leftist in 2013, said the country’s money is “in the wrong hands” and added that he knows how to challenge Trump on climate change, an issue on which the president has demonstrated skepticism.

As the Democratic mayor of the nation’s largest city for the past five years, he coasted to re-election in 2013.
Despite the old truism that the job of New York mayor is the second toughest in America after that of president, de Blasio — sometimes nicknamed “Big Bird” for his lanky, 6-foot, 5-inch (1.97-meter) frame — is one of the few people openly confident of his chances.

While he has been testing the waters for months, travelling to early voting states like Iowa and South Carolina despite a packed mayoral schedule, his campaign has been met with widespread derision.

Democratic polling has been particularly humbling back home for de Blasio.

An eye-popping 76 percent of New York City voters said he should not enter the 2020 presidential race, compared with just 18 percent who said he should, according to a Quinnipiac University poll from early April.

The mayor who succeeded billionaire Michael Bloomberg on the promise of reducing the city’s glaring inequalities has defended his own progressive record, arguing it could be a national model.

He introduced free universal pre-kindergarten and paid sick leave, and early this year rolled out a plan to guarantee health care for all New Yorkers.

Since Trump came to power, de Blasio has denounced the Republican president’s hardening of immigration policy and has championed the fight against climate change.

In late April he endorsed a package of laws aimed at protecting New York’s environment.

In a prelude to his candidacy, he went to promote them Monday in the lobby of Trump Tower, the skyscraper owned by the president and deemed to be among the most polluting structures in Manhattan.

The event turned into a circus, complete with pro-Trump hecklers who held signs reading “worst mayor ever.”

A former supporter of Nicaragua’s Sandinistas, de Blasio was closer to liberal Bernie Sanders than to Hillary Clinton in the 2016 Democratic nomination battle, even though he managed Clinton’s victorious Senate campaign in 2000.

De Blasio is married to Chirlane McCray, an African-American woman who for decades identified as a lesbian.
He remains popular in the black community, but Hispanics are divided and whites mostly view him unfavorably.

US media outlets have been damning of his presidential ambitions. Local papers have mocked his lack of charisma, the daily SUV trips to exercise at a gym in his former stronghold of Brooklyn, and his bickering with New York’s Democratic Governor Andrew Cuomo.

The longer de Blasio delayed his announcement, the more the taunts increased, and several current and former aides spoke in unusually harsh terms to news outlets about his White House bid.

But the mayor appears to have disregarded their opinions, after confiding to MSNBC recently that the only advice that matters is his wife’s.

He also portrays himself as a perpetual underdog, recalling that no one believed in his chances as a former city councilman in 2013, when he won the mayoral race.

“I have spent a lot of time in dead last in many a poll in many a race,” he told The New York Times in January.

“It’s not where you start” the race that counts, he said. “It’s where you end.”