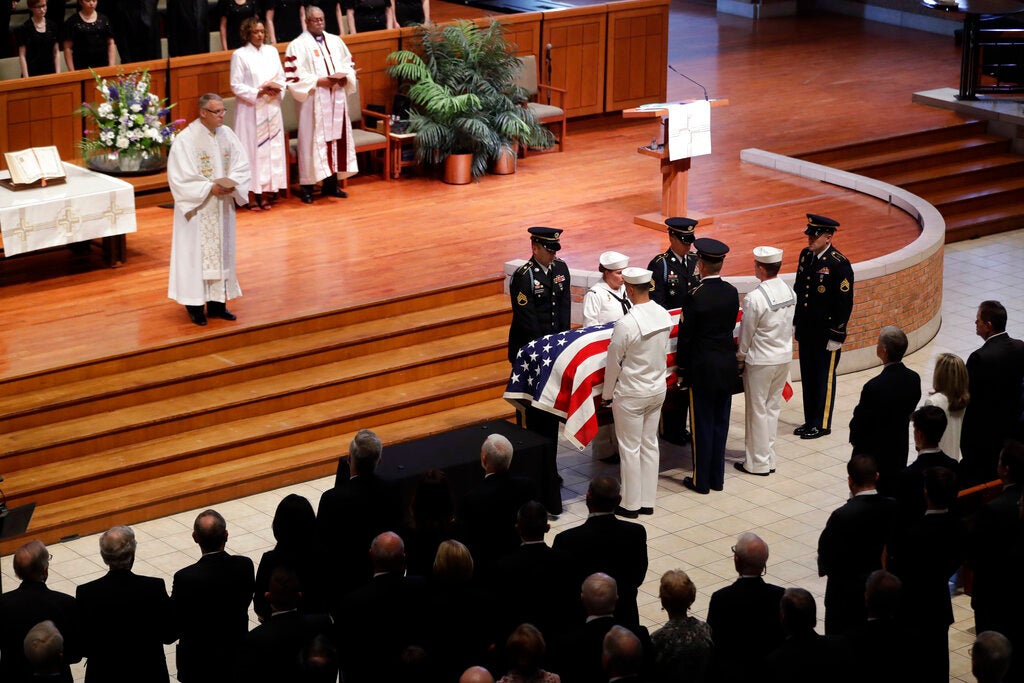 A military honor guard escorts the casket of Sen. Richard Lugar during a funeral service, Wednesday, May 15, 2019, in Indianapolis. Lugar was a longtime Republican senator and former Indianapolis mayor who’s been hailed as an “American statesman” since he died April 28 at age 87. (AP)

INDIANAPOLIS — Former Sen. Richard Lugar’s soft-spoken presence belied an influence on the global stage that was celebrated Wednesday for helping secure peace in many parts of the world.

Lugar’s most prominent achievement during 36 years in the Senate was a program he started with former Georgia Sen. Sam Nunn under which the U.S. paid for the dismantling of thousands of former Soviet nuclear weapons after the Cold War ended in the early 1990s.

Nunn described in a eulogy how he traveled with the Republican Lugar to Ukraine, where Lugar told the country’s president that he would recommend a $150 million program to President George H.W. Bush toward the destruction of its nuclear weapons and missiles. But Ukraine’s president that day publicly announced Lugar’s offer — much to the two senators’ surprise, Nunn said.

“Fortunately, President Bush later ratified Sen. Lugar’s unauthorized and unconstitutional assertion of executive power and three countries — Ukraine, Kazakhstan and Belarus — did get rid of all their nuclear weapons,” Nunn said. “In all of our travels thereafter, my first question was, ‘Dick, did you bring your checkbook?'”

The Nunn-Lugar program is credited with about 7,600 Soviet nuclear warheads being deactivated and the destruction of more than 900 intercontinental ballistic missiles by the time Lugar left office in 2013, according to U.S. military figures.

“Dick made the world a safer place and a better place,” Nunn said.

Wednesday’s 2-1/2 hour funeral capped two days of tributes for Lugar during which his body lied in repose at the Indiana Statehouse Rotunda.

His funeral procession traveled the Indianapolis City-County Building, where it paused beneath a large garrison flag suspended between two fire truck ladders in recognition of his eight years as the city’s mayor before his first election to the Senate in 1976. It also paused outside his alma mater Shortridge High School, with students lining both sides of the street in his honor.

Pence, a former Indiana governor, said Lugar “commanded the admiration of our allies and the respect of our enemies like very few Americans.”

“Dick Lugar left Indiana, America and the world better than he found it — more secure, more at peace, with freedom on the rise,” Pence said.

Chief Justice Roberts, who grew up in northern Indiana, flew with Pence and Senate Majority Leader Mitch McConnell to the funeral but did not speak.

Pence and one of Lugar’s sons noted the recent death of former Democratic Sen. Birch Bayh, who defeated Lugar in a 1974 Senate race before Lugar won a seat two years later. Bayh, who died in March at age 91 , championed the federal Title IX law banning discrimination against women in higher education and authored the constitutional amendments lowering the voting age to 18 and allowing the replacement of vice presidents.

“It’s remarkable to think that two giants of 20th Century Indiana politics departed this world within a few weeks of each other,” Pence said. “It’s the end of an era.”

Lugar was also remembered as a mentor to many people who’ve gone on to prominent careers in Indiana and Washington.

Former Indiana Gov. Mitch Daniels, whose political career started as a mayoral aide to Lugar, choked back tears as he said Lugar showed him “what a really good life looks like.”

“I’ll never approach the standards he set. I still do things venal or unkind or small minded,” the current Purdue University president said. “But I do them a lot less often because I knew Dick Lugar. He made a much better person out of me and I know I’m only one of many here who are thinking that right now.”