US evacuates embassy staff from Iraq over ‘imminent’ Iran threat 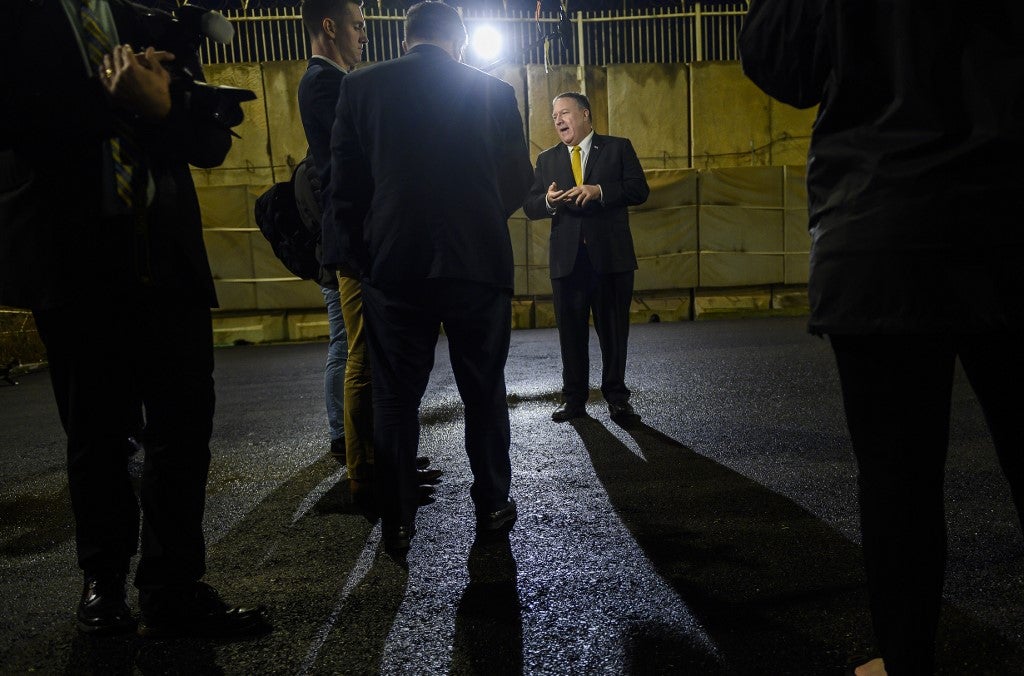 In this file photo taken on January 9, 2019, US Secretary of State Mike Pompeo speaks to the press at the US Embassy compound in Baghdad. The US on May 15, 2019, ordered all non-emergency staff to leave its embassy in Baghdad and consulate in Arbil, ramping up alarm over an alleged Iran threat even as allies appeared less than convinced. AFP

WASHINGTON, United States – The US government ordered the evacuation of non-emergency staff from its Baghdad embassy Wednesday due to an “imminent” threat from Iranian-linked Iraqi militias, but President Donald Trump predicted that Iran would “soon” want to start talks.

The evacuation order, also covering the US consulate in Arbil, came 10 days after the Pentagon deployed an aircraft carrier task force and B-52 bombers to the Gulf to fend off an unspecified plot by Tehran to attack US forces or allies.

Washington and Tehran have said they have no intention of going to war, but tensions have soared in recent weeks and Trump’s critics say he is rushing into a conflict.

In a series of tweets, Trump sought to portray the situation as under control, saying there was no discord in the White House and that Iran would want to negotiate.

“I’m sure that Iran will want to talk soon,” he said.

Trump blasted media reports about turmoil in the White House, saying “there is no infighting whatsoever.”

Despite international skepticism, the US government has been building a case for growing threats from Iran, a longtime enemy and rival of US allies Israel and Saudi Arabia.

“This is an imminent threat to our personnel,” said a second official.

“There is no doubt in my mind that under the circumstances, a partial ordered departure (from the embassy) is a reasonable thing to do.”

On Tuesday, Iran’s supreme leader, Ayatollah Ali Khamenei, insisted the showdown between the Islamic republic and the United States was a mere test of resolve.

“This face-off is not military because there is not going to be any war. Neither we nor them (the US) seek war,” he said.

US Secretary of State Mike Pompeo echoed that sentiment, saying in Sochi, Russia: “We fundamentally do not seek a war with Iran.”

But the evacuation of US diplomatic personnel from Iraq added to broader worries.

Democrats in Congress demanded that the Trump administration brief them on the Iran threat, warning that the US legislature has not approved military action against Tehran.

On Monday, British foreign minister Jeremy Hunt called for “a period of calm” and bluntly warned of the danger of pushing Iran back towards developing nuclear weapons.

And in Moscow, President Vladimir Putin’s spokesman Dmitry Peskov on Wednesday expressed concerns about “the continued escalation of tensions around this subject.”

Washington says it has received intelligence on possible attacks by Iranian or Iranian-backed forces, possibly targeting US bases in Iraq or Syria.

Some observers speculate that Tehran is seeking to retaliate over Washington’s decision in April to put Iran’s Revolutionary Guards on a terror blacklist — a move designed to stymie their activities across the Middle East.

But since the first US warning on May 5, the only activity seen has been a still-mysterious “attack” Monday on tankers anchored off Fujairah, an Emirati port located at the strategically crucial entrance to the Gulf.

One or more vessels incurred light hull damage, but what caused the damage and who was behind it remains unknown.

After Ghika’s comments drew a sharp retort from the US Central Command, Britain’s defense ministry said Wednesday they have “long been clear about our concerns over Iran’s destabilizing behavior in the region” — while still not confirming any new imminent danger.

Germany and the Netherlands said Wednesday they were suspending training of soldiers in Iraq. German defense ministry spokesman Jens Flosdorff said there was “generally heightened alert, awareness” among soldiers in the region, but gave no specifics.

In the US Congress, Democrats demanded to know why the Trump administration was boosting its Gulf presence and, according to media reports, considering war plans that would involve sending 120,000 US troops to the Middle East if Iran attacks American assets.

Senator Bob Menendez, the senior Democrat on the Senate foreign relations panel, demanded a briefing “immediately” on the threat intelligence, any plans for war and the decision to order embassy staff out of Iraq.

“Congress has not authorized war with Iran… If (the administration) were contemplating military action with Iran, it must come to Congress to seek approval,” he said. /cbb