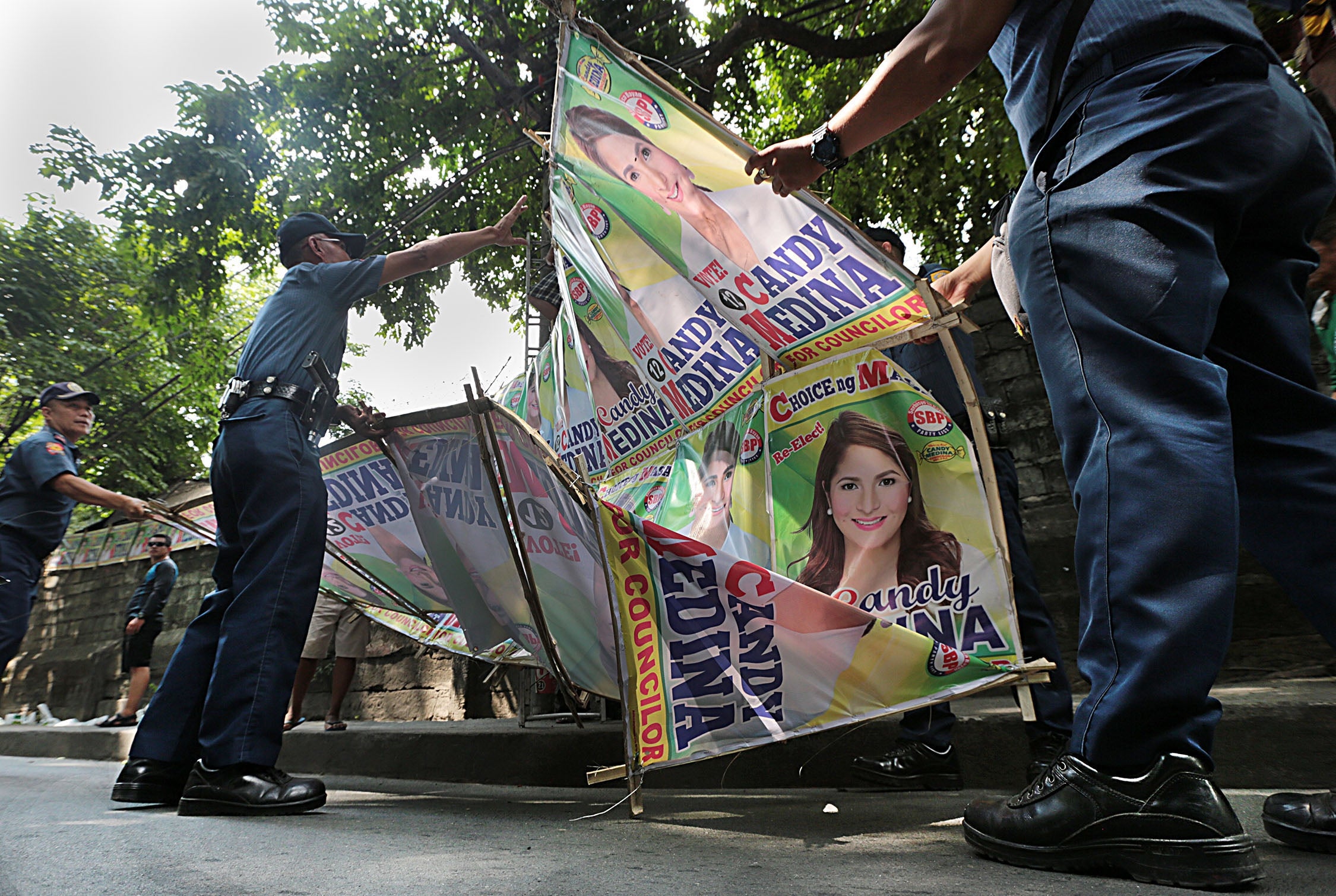 The volume of campaign materials to be collected from this year’s midterm polls is expected to surpass that from the 2016 national elections, according to the Metropolitan Manila Development Authority (MMDA).

Despite the huge volume, the MMDA has expressed hope that the bulk will not end up in dumps and landfills, as it seeks partners to help it  recycle tarpaulins, streamers and other election paraphernalia.

The Commission on Elections (Comelec) on Wednesday reminded national and local candidates to take down their campaign materials if they don’t want to be charged with an election offense.

In its post-cleanup report on Tuesday, MMDA’s  Metro Parkway Clearing Group said that just a day after the elections it collected 23.42 tons of campaign materials, filling up seven dump trucks.

Francis Martinez, the group’s chief, said it had seized at least 21,700 pieces of election-related paraphernalia from major thoroughfares, as well as those hanging on electrical posts, wires and trees in Metro Manila.

Street sweepers, meanwhile, have removed sample ballots, flyers and leaflets that littered the vicinity of public schools, most of which were used as polling precincts on election day.

Since “Oplan Baklas” started on March 1, the MMDA has collected a total of 168.84 tons of campaign materials, including those that were placed outside designated areas by the Comelec.

Most of the trash were collected from Manila, Quezon City and Parañaque City.

In 2016, the MMDA collected 206.61 tons of campaign-related materials for the entire election season.

MMDA Assistant Secretary Celine Pialago said the agency was expecting the volume of this year’s collection to go up, given the increased number of party list groups and aggressive advertising by political candidates and parties.

Comelec Commissioner Rowena Guanzon said that under election rules, candidates should take down their campaign posters and other election paraphernalia immediately after the elections, warning that failing to do so could lead to the disqualification of a winning candidate.

“That is already an election offense if after three days they still failed to remove their posters. If he is convicted then he is up for a disqualification case,” she said.

Guanzon said the candidates could recycle the  tarpaulins, or donate them to the homeless or to the fire victims. “It’s bad manners to just leave behind those garbage on the streets.”

EcoWaste showed that tarpaulins bearing faces and names of candidates could be turned into shopping bags, mobile phone cases and shoe bags.

Paper-based paraphernalia were reused as folders, envelopes and even teaching aids for the coming school year.

“Unfortunately, those who won would not think of these campaign materials anymore,” said Thony Dizon, EcoWaste’s chemical safety campaigner. “And those who lost would rather not think about it.”

Dizon said these sample products could be made into livelihood projects for communities.

These efforts, however, are only temporary solutions to the bigger problem on waste production during election seasons, said Aileen Lucero, the group’s national coordinator.