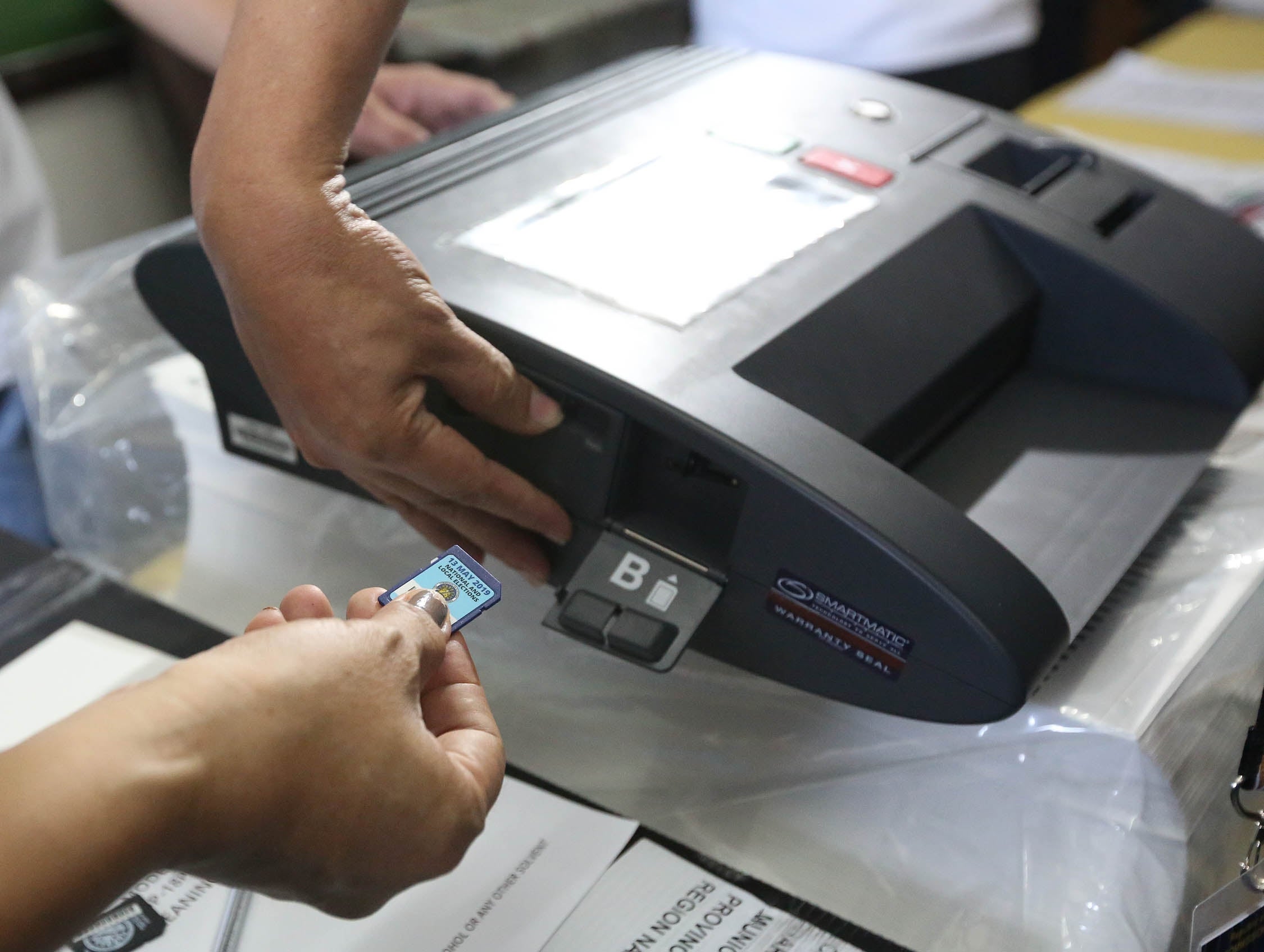 CAUSE OF DELAY SD cards are inserted into a new vote counting machine at San Jose Elementary School in Makati City after a defective VCM delayed proceedings on election day on Monday. —MARIANNE BERMUDEZ

MANILA, Philippines — The Senate and the House of Representatives have agreed to investigate the technical glitches and other problems that bugged the balloting in many polling centers during Monday’s midterm elections, Sen. Aquilino Koko” Pimentel III said on Wednesday.

Pimentel said the joint congressional oversight committee on the automated election system agreed to summon Commission on Elections (Comelec) and other officials to the inquiry on June 4.

“It’s the House that requested the date [of the hearing]. I wanted [to hold it] earlier,” he told reporters.

Sen. Panfilo Lacson said the Senate should conduct an inquiry into the problems, which could cast doubt on the results of the elections, immediately after the resumption of sessions next Monday.

“[The] Comelec has to address certain issues that I myself will raise,” Lacson said.

Election officials, he said, should explain why they decided to forgo the “simultaneous transmission of data at the precinct level … to [the] transparency server, which in turn transmits simultaneously to the authorized recipients” of the election data.

On Tuesday, Comelec chief Sheriff Abas expressed openness to reverting to pen-and-paper voting should lawmakers order it due to the problems encountered with the vote-counting machines (VCMs).

A report from the Department of Education showed that at least 1,333 VCMs malfunctioned during the balloting on Monday.

“For as long as [the automated election law] is not amended, the Comelec will always see to it that the conduct of elections is automated. But if that will be amended by Congress, whatever they say to us, we will do it, whether it’s manual or automated,” Abas said.

But the election watchdog Parish Pastoral Council for Responsible Voting (PPCRV), which conducts an unofficial count of the votes during elections, said returning to the hand-vote would be a “step backward.”

Myla Villanueva, the PPCRV chair, said reverting to the written-vote system would not solve the problems besetting the automated election system.

“It’s moving backward in time and not forward in looking for better solutions,” she told reporters on Wednesday.

“Technology moves fast. Maybe there are better ways [that can be considered] appropriate to our culture and experience,” Villanueva said.

“[A]utomation is working. We get the results fast. There are delays, machines that bog down, but what’s important is what are the processes that should be done to speed up our response to these situations,” she said.

Villanueva, who once served as a poll watcher,recommended that the Comelec study how it could improve the system, which could start by opening up to suppliers and bidders with “global experience.”

The PPCRV also asked the Comelec to provide it with a copy of the central server’s data to erase suspicions of electoral fraud arising from the long delay in the transmission of results on Monday night.

Villanueva said the PPCRV wanted to be sure that the data from both the central server and the transparency server matched.

She said this was on top of the PPCRV’s request to the Comelec to give it access to the logs before transmission failed so that the group could determine what caused the failure.

The Comelec on Wednesday insisted that technical problems and not fraud caused Monday night’s transmission failure.

“We are willing to undergo third party audit. All they would see is that the central server fully functioning while the transparency server only temporarily hanged up,” Guanzon said.

Guanzon said she wanted an investigation of the defects and the withholding of payment to the SD card suppliers — S1 Technologies Inc. and Silicon Valley Computer Group.

“This is my personal view. The supplier[s] of the SD cards, they should not be paid in full,” she told reporters.

“I want them investigated. I also want the procurement process reviewed, as well as their delivery of the SD cards because that was the real culprit,” Guanzon said.

The Comelec had yet to make a decision, she added.

Several groups, including the Alliance of Concerned Teachers, the union of public school teachers who served as election inspectors on Monday, have demanded a “sound and logical explanation” of the transmission failure from the Comelec.

Catholic priest Edwin Gariguez, executive secretary of the National Secretariat for Social Action of the Catholic Bishops’ Conference of the Philippines, called for the suspension of the proclamation of winners until the results could be validated.

“We are calling [for the suspension of] the proclamation of winning senatorial candidates and party list groups until the issue of fraud is resolved,” Gariguez said.

“We demand an independent and impartial investigation of the alleged fraud and manipulation of [the] automated canvassing [of votes] by the Comelec and Smartmatic,” he added.

Smartmatic is the Argentine supplier of the VCMs.

The Comelec, however, shrugged off the Church’s demand, saying allegations of fraud were no reason to postpone the proclamation. —With reports from Tina G. Santos and Mariejo S. Ramos