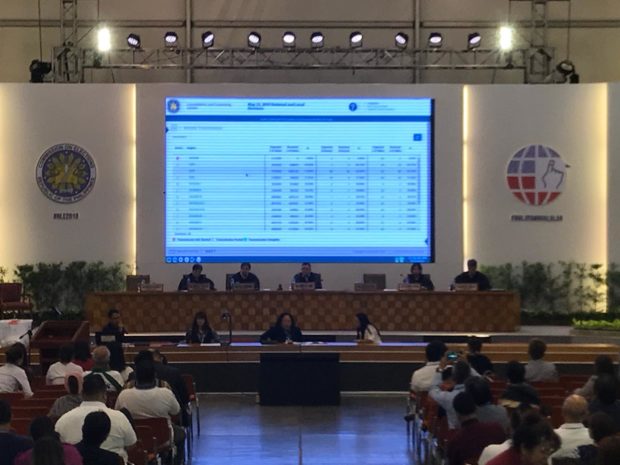 The National Board of Canvassers (NBOC) resumes canvassing votes for May 13 elections. (Photo by DARRYL JOHN ESGUERRA / INQUIRER.net)

MANILA, Philippines — The Anti-Crime and Terrorism Community Involvement and Support (ACT-CIS) party-list group, which is supported by radio personality Erwin Tulfo, continued to dominate the party-list race of the May midterm elections on Wednesday.

As of 11:59 p.m. on Wednesday, the ACT-CIS garnered 1,361,983 votes, making it the first party-list group to breach the 1 million mark, according to the partial official tally of the Commission on Elections (Comelec), sitting as the National Board of Canvassers (NBOC).

ACT-CIS is followed by these groups:

The canvassed votes were sourced from 89 certificates of canvass (COCs) — or 53 percent of clustered precincts nationwide and Philippine posts abroad. There are 167 COCs in all.

There are 181 party-list groups vying for 59 seats in the May midterm elections.

A group needs to get at least 2 percent of the total party-list votes to earn a seat at the House of Representatives. What remains of the 59 seats will then be distributed among party-list groups that got more than 2 percent.

The party-list system was enacted in 1995, through the Party-list System Act (Republic Act No. 7941) to give marginalized and underrepresented sectors a voice in Congress.

However, the party-list system has long been criticized for allegedly being utilized as a political vehicle.

According to election watchdog group Kontra Daya, nearly half or at least 62 groups running in May elections have ties with political dynasties, represent special business interests, or are running with questionable advocacies.